How to Calculate Correlation Coefficients in R (5 Examples) | cor Function

This tutorial illustrates how to calculate correlations using the cor function in the R programming language.

The tutorial will consist of five examples for the application of the cor function. To be more specific, the content is structured as follows:

The data below is used as basement for this R programming tutorial.

First, we have to set a random seed for reproducibility:

Then, we can create a first variable as shown below:

The previously shown output of the RStudio console shows that our example data is a randomly distributed numerical vector called x.

Next, we have to create a second variable:

The previous output shows the first values of our second numerical variable.

Let’s use these data to calculate some correlations!

In this example, I’ll illustrate how to apply the cor function to compute the Pearson correlation coefficient.

As you can see, the Pearson correlation coefficient of our two example variables is 0.63733.

We can also use the cor function to calculate other types of correlation coefficients. This example explains how to compute a Kendall Correlation:

As shown in the previous R code, we had to set the method argument to be equal to “kendall”.

Similar to Example 2, we can use the method argument of the cor function to return the Spearman correlation coefficient for our two variables:

In this example, I’ll explain how to calculate a correlation when the given data contains missing values (i.e. NA).

First, we have to modify our example data:

As you can see in the RStudio console, we have inserted some NA values in our x variable.

If we now use the new x variable with NA values to calculate a correlation, NA is returned as result:

If we want to remove those NA observations from our data to calculate a valid correlation coefficient, we have to set the use argument to be equal to “complete.obs”:

In Example 5, I’ll demonstrate how to create a correlation matrix for an entire data frame.

For this, we first have to create an exemplifying data set:

Table 1 illustrates the first lines of our example data.

Next, we can use the cor function to calculate a correlation matrix of these data: 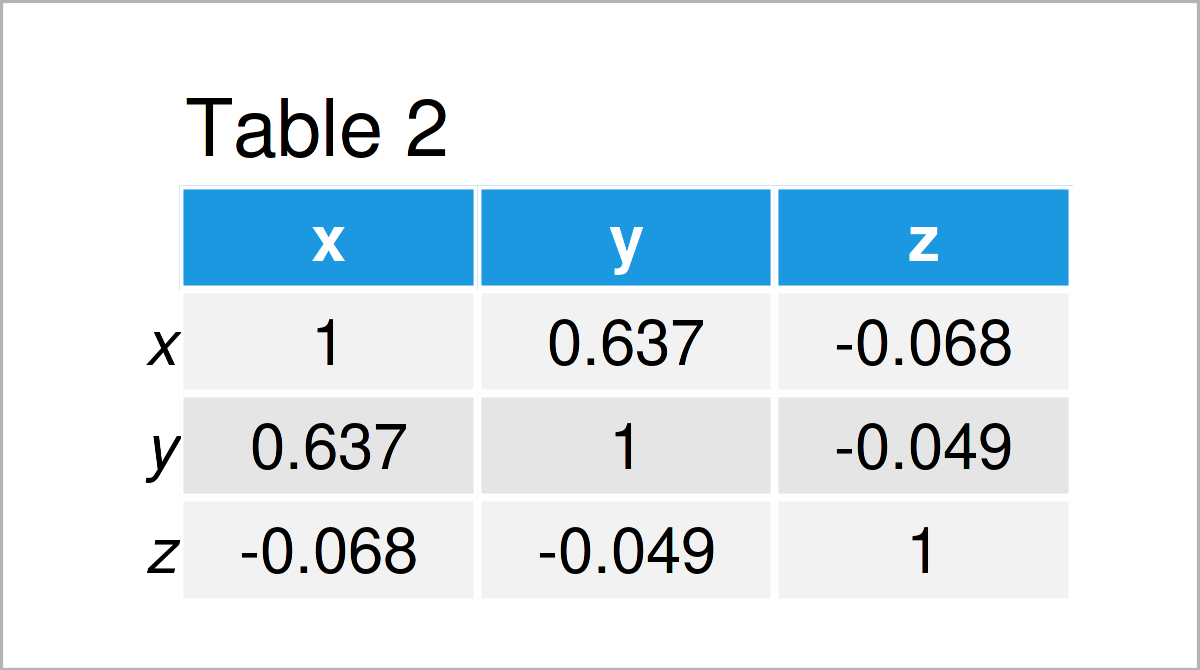 In Table 2 it is shown that we have created a correlation matrix for our example data frame by using the previous syntax.

In case you need more information on the topics of this tutorial, I recommend having a look at the following video on the Statistics Globe YouTube channel. In the video, I illustrate the examples of this article:

To summarize: You have learned in this article how to compute correlations using the cor function in the R programming language. If you have any additional comments or questions, let me know in the comments.