Your data contains NA, <NA>, or NaN values? That’s not the end of the world — but your alarm bells should start ringing!

In R (or R Studio), NA stands for Not Available. Each cell of your data that displays NA is a missing value.

Not available values are sometimes enclosed by < and >, i.e. <NA>. That happens when the vector or column that contains the NA is a factor.

In R, NA needs to be distinguished from NaN. NaN stands for Not a Number and represents an undefined or unrepresentable value. It appears, for instance, when you try to divide by zero.

Consider the following example in R:

Column X2 has two missing values in the first and third row. The missings are represented by <NA>, since the second column is a factor.

The third column X3 is of class numeric (the same as X1). The second entry of the column is not a number and is therefore displayed by the code NaN.

The fourth column X4 is complete and does therefore not contain any NAs or NaNs.

Important Functions for Dealing with NAs

In the following, I’ll show you some of the most important approaches and functions of the R programming language for the handling of missing data. I’ll use our exemplifying data table that we created above.

The na.omit function is used to exclude rows of a data set with one or more missing values. Read more…

na.omit can also be used to delete NAs in a vector…

Note: With such a for loop, all functions can be applied to a list (not only na.omit).

na.rm is used to remove NAs of your data matrix within a function by setting na.rm = TRUE. For instance, na.rm can be used in combination with the functions mean…

Often confusing: The function cor uses the option use instead of na.rm.

The complete.cases function creates a logical vector that indicates complete rows of our data matrix by TRUE. Read more…

The function can also be used for casewise deletion (same as na.omit).

is.na is also used to identify missing values via TRUE and FALSE (TRUE indicates NA). In contrast to the function complete.cases, is.na retains the dimension of our data matrix. Read more…

Combined with the function which, logical vectors can be used to find missing values. Read more…

Another benefit of logical vectors is the possibility to count the amount of missing values. The function sum can be used together with is.na to count NA values in R.

The summary function provides another way to count NA values in a data table, column, array, or vector.

Table 2: Summary Function in R Counts NAs in Each Column

In the bottom cell of each column of Table 2, the amount of NAs is displayed.

The functions rbind and na.omit can be combined in order to merge (i.e. row bind) only complete rows.

It is also possible to exclude all rows with NA, NaN, and/or Inf values.

Sometimes existing values have to be recoded to NA. If you want to replace a certain value with NA, you can do it as follows.

If you want to recode a specific cell of your data matrix to NA, you can do it as follows.

Logical vectors can also be used to replace NA with other values, e.g. 0. Read more…

Need more help with your NA values in R? Then you should definitely have a look at the following video of my Statistical Programming YouTube channel.

In this video, I’m explaining how to deal with incomplete data. I show easy-to-understand live examples and explain how to apply different functions such as is.na, na.omit, and na.rm.

I’ve shown you my favourite ways to handle NA values in R.

Now, I would like to hear about your experiences.

Which of these methods is your favourite? Do you use any other methods that I missed above?

Let me know in the comments!

The header graphic of this page shows a correlation plot of two variables. Missing cases are illustrated via NA.

With the following code, the plot is created in R. 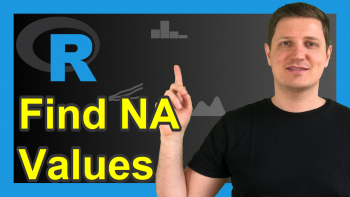 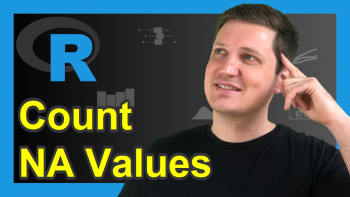