In this article, I’ll explain how to concatenate a vector of character strings in the R programming language. The table of contents is as follows:

In the examples of this tutorial, I will use the following vector of character strings:

So let’s move on to the examples…

Let’s first have a look at the help documentation of the paste function in R: 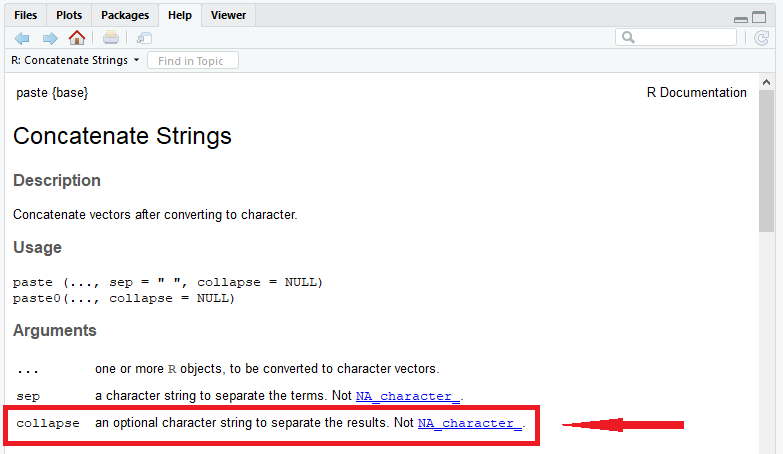 As you can see in Figure 1, the collapse option of the paste function is what we are looking for.

So let’s apply this in practice: With this R code, we are separating our example vector with blanks…

…with this code we are separating with an underline…

…and with this code we are just pasting everything together without a separator:

With the collapse option, you can specify every character value you want as separator.

In my opinion, the paste function provides the best solution for the concatenation of character strings. However, for completion I want to show you another alternative in the next example…

An alternative to the base R solution of paste() is the str_c function of the stringr Package. Before we can use the str_c command in R, we need to install and load the stringr package:

Now we can apply str_c in a similar manner as paste:

str_c(x, collapse = " ") # Collapse string with str_c # "hello this should be concatenated"

Below, you can find a video on the Statistics Globe YouTube channel where I describe the steps of this tutorial in expanded detail:

Do you want to see another example for the concatenation of character strings in R? Then you could have a look at the following video of the Mr. Math Expert YouTube channel.

In the video, the speaker explains how you could use the paste function without specifying the collapse option in order to combine several strings. He simply inserts each character string as separate value into the paste function.

Besides the video, you may also have a look at the following tutorials of this website. I have already published several tutorials on the handling of character strings in R

After reading this tutorial, you should know how to concatenate two or more character strings in R.

Please note that it would also be possible to concatenate numerical values in a string using the same methods as shown in this tutorial.

However, in case you are still struggling with this topic, don’t hesitate to let me know in the comments!

Count Number of Characters in String in R (2 Examples)