The R polygon function draws a polygon to a plot. The basic R syntax for the polygon command is illustrated above.

In the following tutorial, I will show you six examples for the application of polygon in the R language.

Example 1: Draw a Square Polygon in an R Plot

Let’s begin with an easy example. In this example, we are going to draw a simple square polygon to an empty R plot. Let’s first create an empty plot:

To this plot, we can draw a polygon with the following R code: 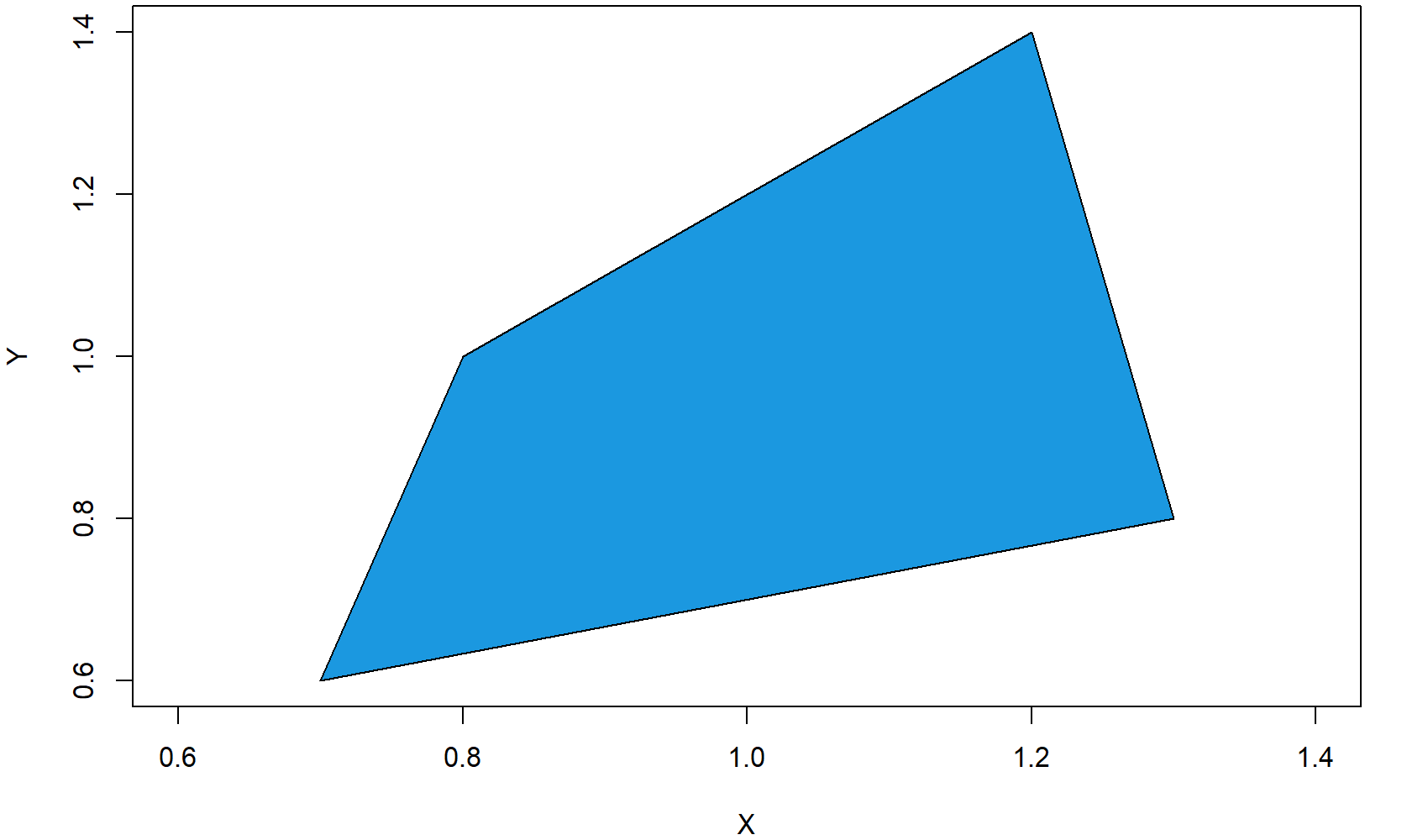 As you can see, the previous polygon() R code consists of three different components:

OK, that was easy, but let’s make the graphic a bit prettier…

For the second example, I’m using exactly the same code as in Example 1, but this time I’m modifying the border color of the polygon. Let’s begin again with an empty graph…

…and then let’s draw a thick red border around the polygon: 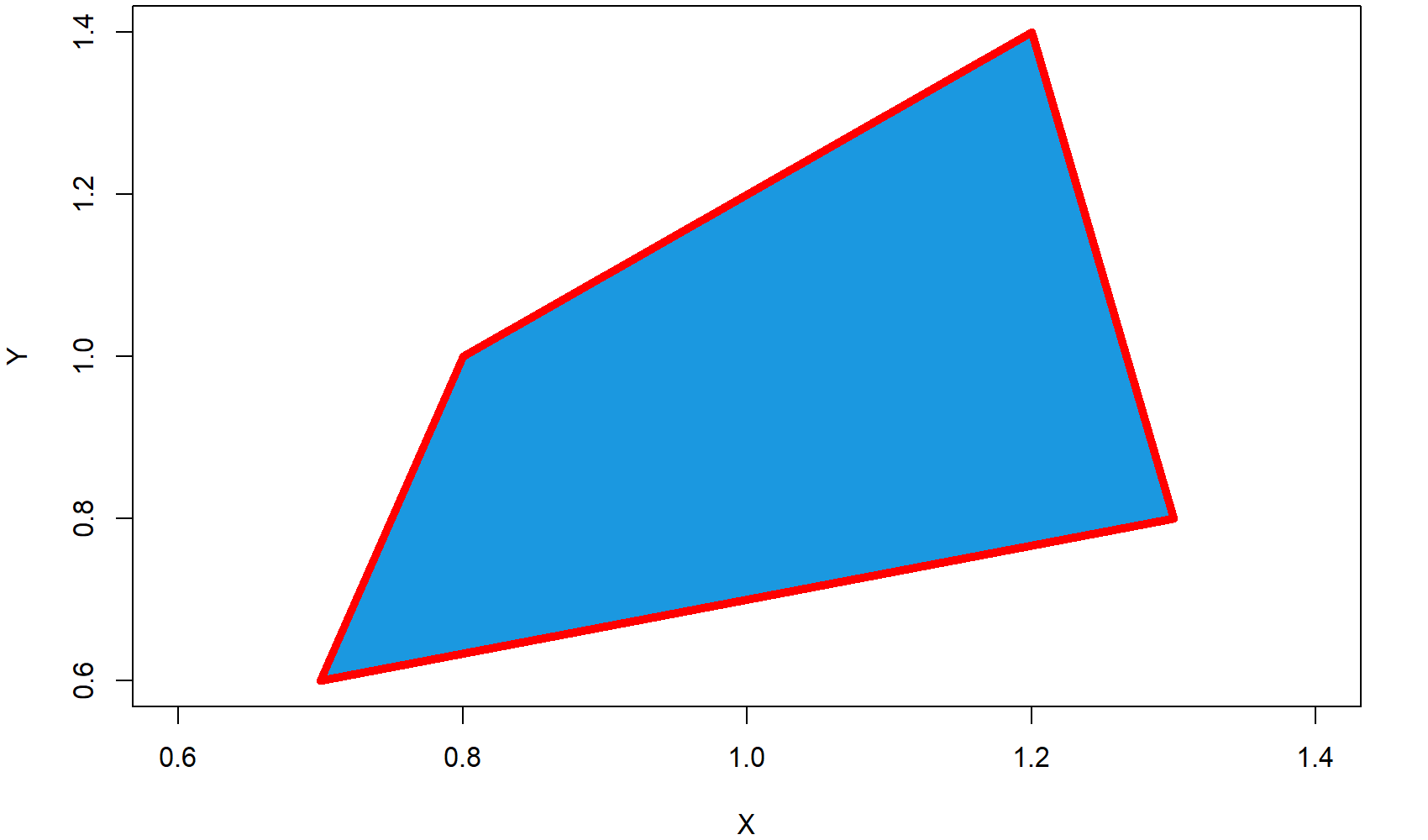 We used two further options within the R polygon function:

That’s it with the square polygon examples. But as you will see in the next examples, the polygon R function has much more to offer.

In the following example, I will show you how to create a frequency polygon in R. Let’s create some data for the example:

Then, we can add some color below the line with the polygon function:

To make the polygon frequency plot a bit prettier, we can also add some squares at the cut-points of our frequency polygon:

And finally, we can add some line segments to the figure: 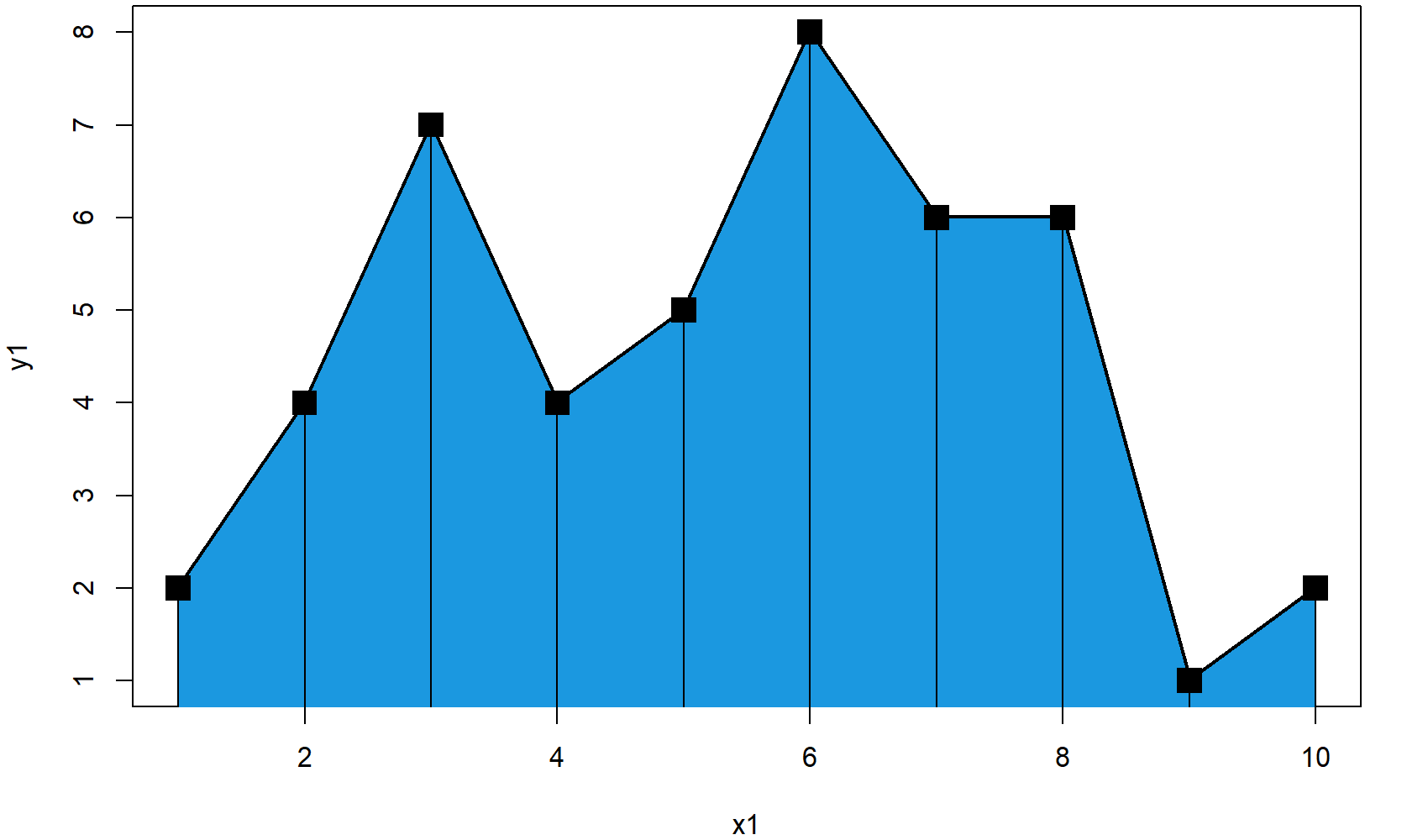 Looks good. So let’s move on to the next – very popular – application of the polygon R function…

The following application of the polygon function is quite often used to make the plot of a probability density function (PDF) more visible. With the following R code, you can fill the area below a density curve with color (i.e. we are drawing a polygon according to the shape of the density).

Again, let’s begin with some data. For this example, I’m going to use a poisson distribution:

First, we have to draw the density curve to a plot…

…and then we can add the polygon below this density: 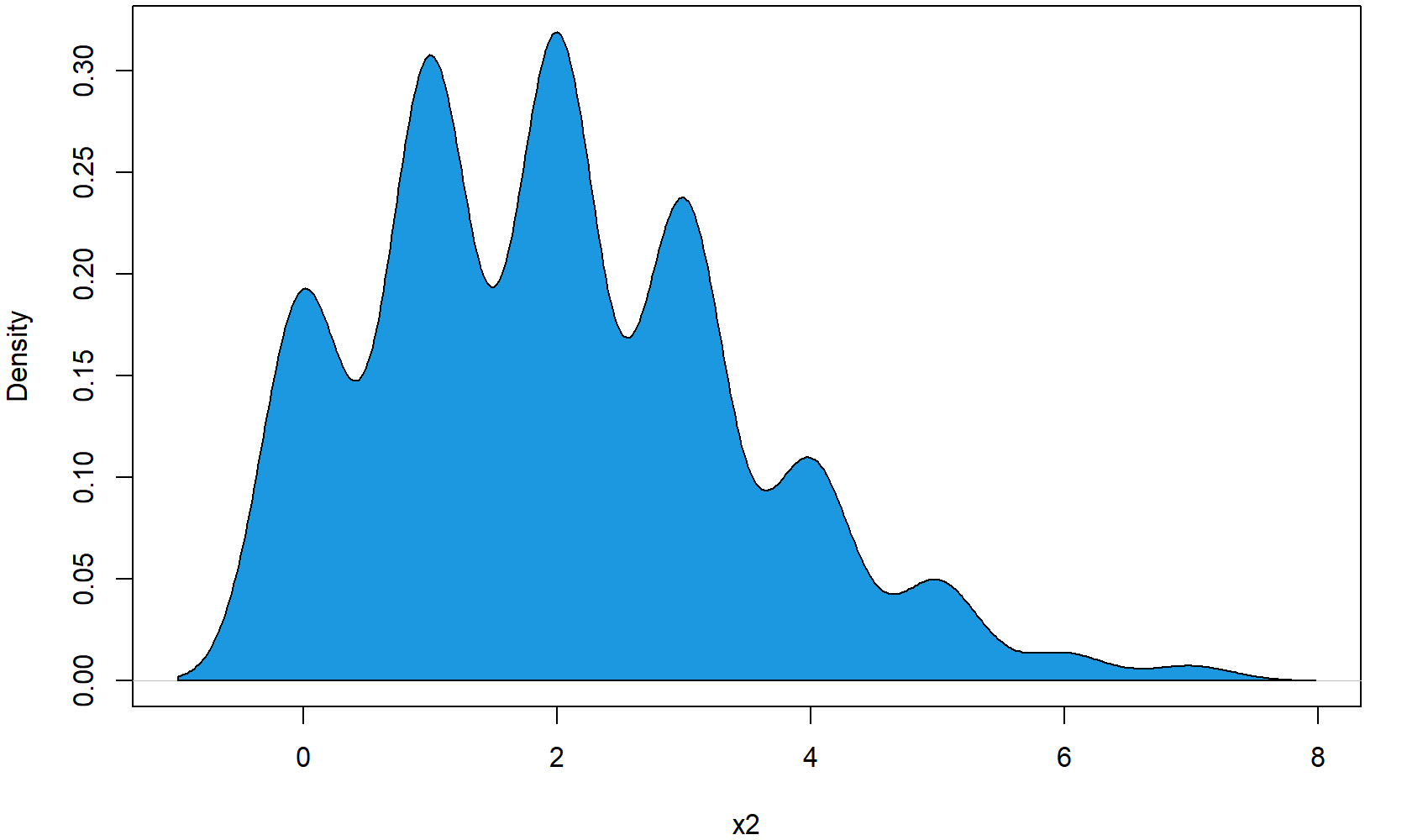 So, that’s the basic code for a density polygon. But we can modify the polygon in several ways…

In this example, I’m going to show you how to restrict your density polygon to a certain range of x-values. At this point, I’m just continuing the code of Example 4.

First, we have to define the range, to which we want to restrict our polygon:

Then, we can use this range to subset our polygon coordinates: 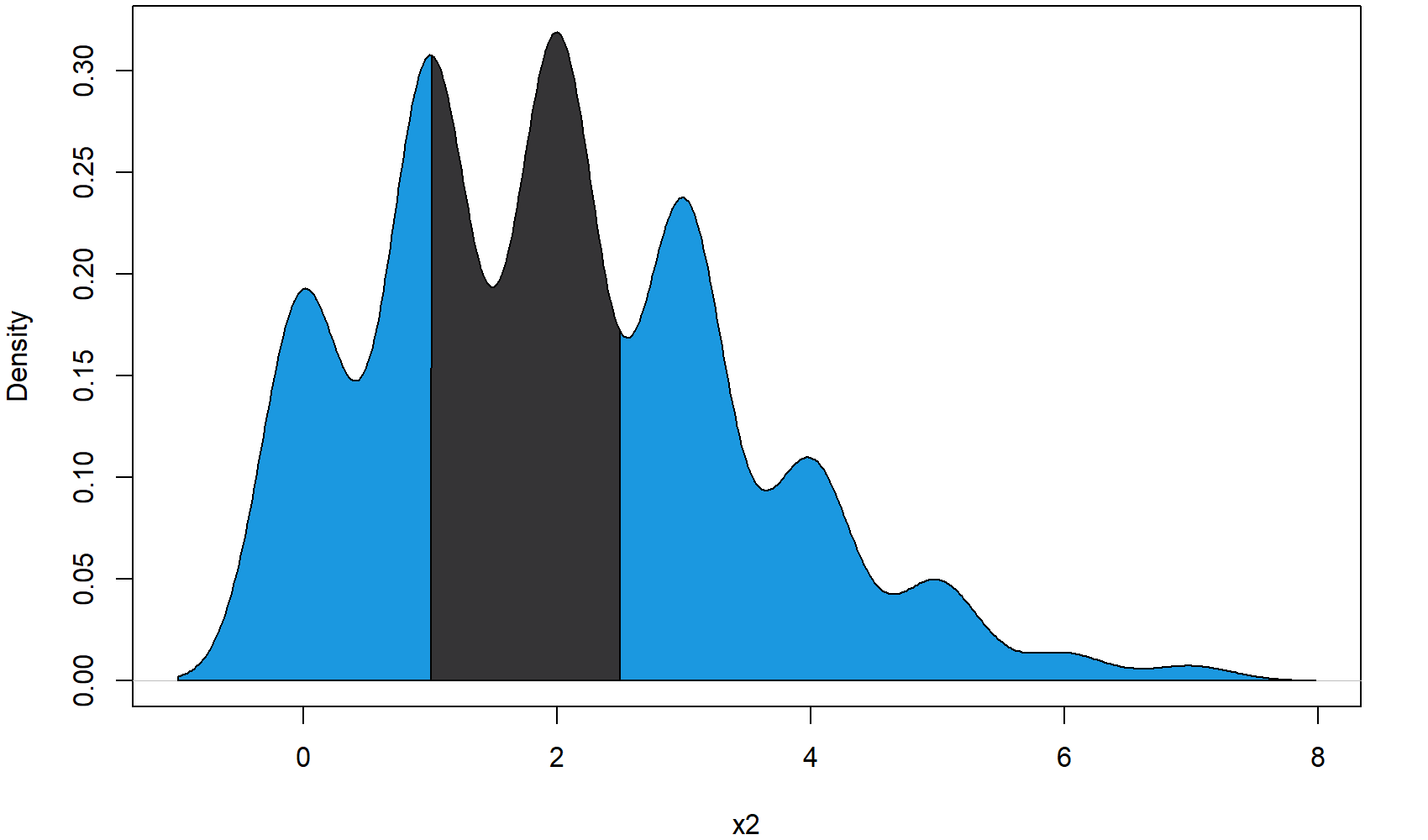 At this point, you know how to restrict polygons to certain X-values. However, we could also restrict a polygon to certain values on the Y-axis…

We can either restrict our density polygon to a fixed Y-range – or even prettier, we can restrict our polygon to the shapes of two densities. For the first density, I’m using again the x2 data that we created in Example 2. Let’s plot the x2 density:

For the second density, I’m using the following data:

We can now use the values of our first and second density to draw a polygon between the two densities: 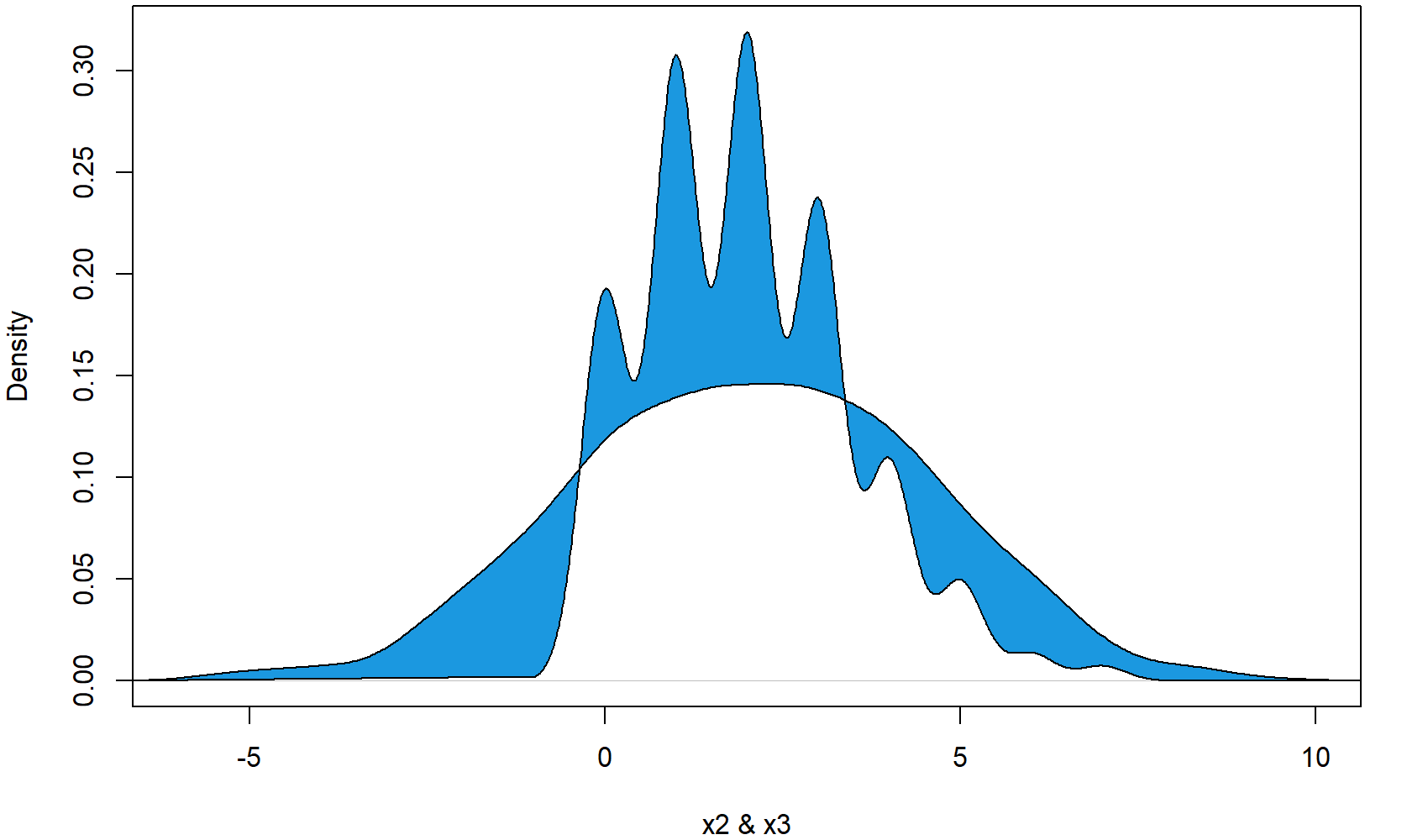 You need even more examples? No problem! Just have a look at the following video of the YouTube channel intromediateecon. In the video, the speaker explains some cool tricks for the application of polygon in R – especially for drawing polygon shades below a bell curve. 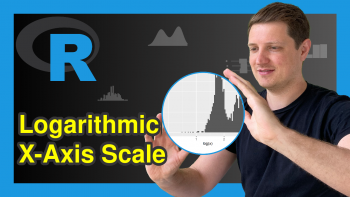 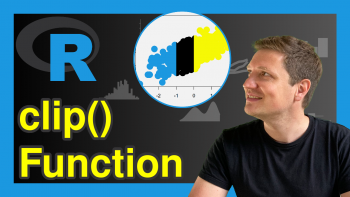