In the following article, I’ll show you why predictive mean matching is heavily outperforming all the other imputation methods for missing data.

I have split the article in several sections. You may jump to the specific topic you are interested in:

I have to admit, the predictive mean matching algorithm is not so easy to understand, when you read it the first time. However, in practice it’s easy to apply!

In the following, I’m going to show you how to apply predictive mean matching in R.

Let’s create some random data for our example:

Table 1: First Six Rows of Our Data with Missing Values in Y

Let’s move on to the application of predictive mean matching to our example data. First, we need to install the R package mice (detailed explanations can be found in van Buuren and Groothuis-Oudshoorn, 2011).

With the following code, we can impute our missing data via single imputation.

The function complete stores the imputed data in a new data object (in our example, we call it data_imp_single).

As I mentioned previously, single imputation is almost never a good idea, since it underestimates your standard errors. However, by specifying m = 5 within the function mice, you can easily switch to multiple imputation (i.e. 5 imputed data sets).

The specifications “repeated” and include = TRUE tell the complete function how to store our multiply imputed data in the object data_imp_multi_all. Have a look at the documentation of complete in order to explore different ways of storing your imputed data (by typing ?complete into your R Studio console).

With the remaining code we do some simple data cleaning and store the dataset in the object data_imp_multi.

This is how our multiply imputed data set looks like:

You might say: “Isn’t that bad?! It seems like the imputed values are very different to each other.”

Yes, they are different – But that is exactly what we expect (and what we want) when we do multiple imputation. The difference between the imputed values reflects the uncertainty of our imputation. When we calculate standard errors (i.e. confidence intervals) for our point estimates, we include this uncertainty into the calculation, which leads to more correct standard errors.

In my previous post, I raved about predictive mean matching, as this method is supposed to fix all the problems of regression imputation.

Of course I do not want to deprive you of the proof! Therefore, I’m going to use exactly the same data as in the regression imputation example – but this time I’m also imputing via predictive mean matching.

Let’s have a closer look at drawback 1 – the plausibility of imputed values. Consider the following example data:

We impute once via stochastic regression imputation…

… and once via predictive mean matching (for the sake of simplicity, both times via single imputation).

Comparing the plausibility of both imputations, we can see that stochastic regression imputation leads to 10 implausible values (i.e. incomes below 0):

Predictive mean matching, on the other hand, does not lead to implausible values:

Reason: Predictive mean matching only imputes values that were actually observed for other units. The range of imputed values therefore always lies between the minimum and the maximum of the observed values.

How well does predictive mean matching work for heteroscedastic data (i.e. drawback 2)? Let’s check it with the following example data:

As before, we first impute by stochastic regression imputation…

… and then by predictive mean matching:

A good way for evaluating the two imputation methods for heteroscedastic data is a simple correlation plot: 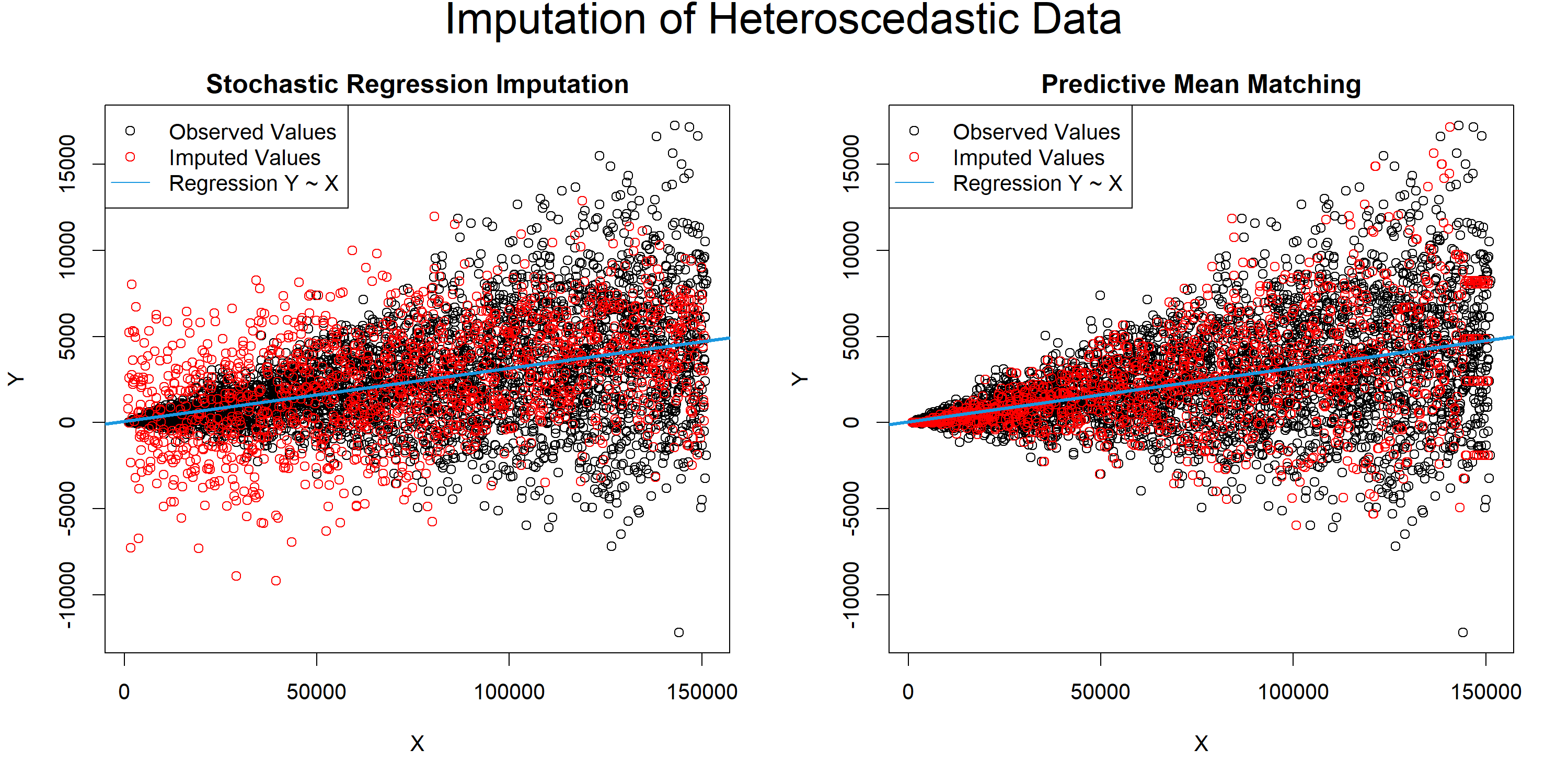 The plot makes it obvious:

In other words: Even though stochastic regression imputation is much more popular among practitioners, there are strong arguments for using predictive mean matching instead!

So far, I have only shown you how to apply predictive mean matching in R. However, the imputation method is implemented in many different software packages, such as SAS or Stata. Personally, I’m not an expert for these software packages, but there are many good instructions out there.

For instance, one tutorial I can recommend was published by the Stata YouTube channel. The speaker, Chuck Huber, explains step by step how to handle missing data by predictive mean matching in Stata.

In this article, I have shown you why I’m such a big fan of predictive mean matching.

However, I would like to hear about your opinion!

Are you using predictive mean matching or do you prefer other imputation methods? Have I missed any pros or cons in my article?

Let me know in the comments (questions are also very welcome)!

The header graphic of this page shows a correlation plot of two highly correlated variables. The black line indicates the regression slope. The black stars indicate missing values, which are replaced by a close observed value.