In this tutorial, I’ll demonstrate how to annotate significance levels to a ggplot2 plot using the ggsignif package in the R programming language.

The following R code illustrates how to create a box-and-whisker plot with significance levels in the R programming language.

For this, we first have to create an exemplifying data set: 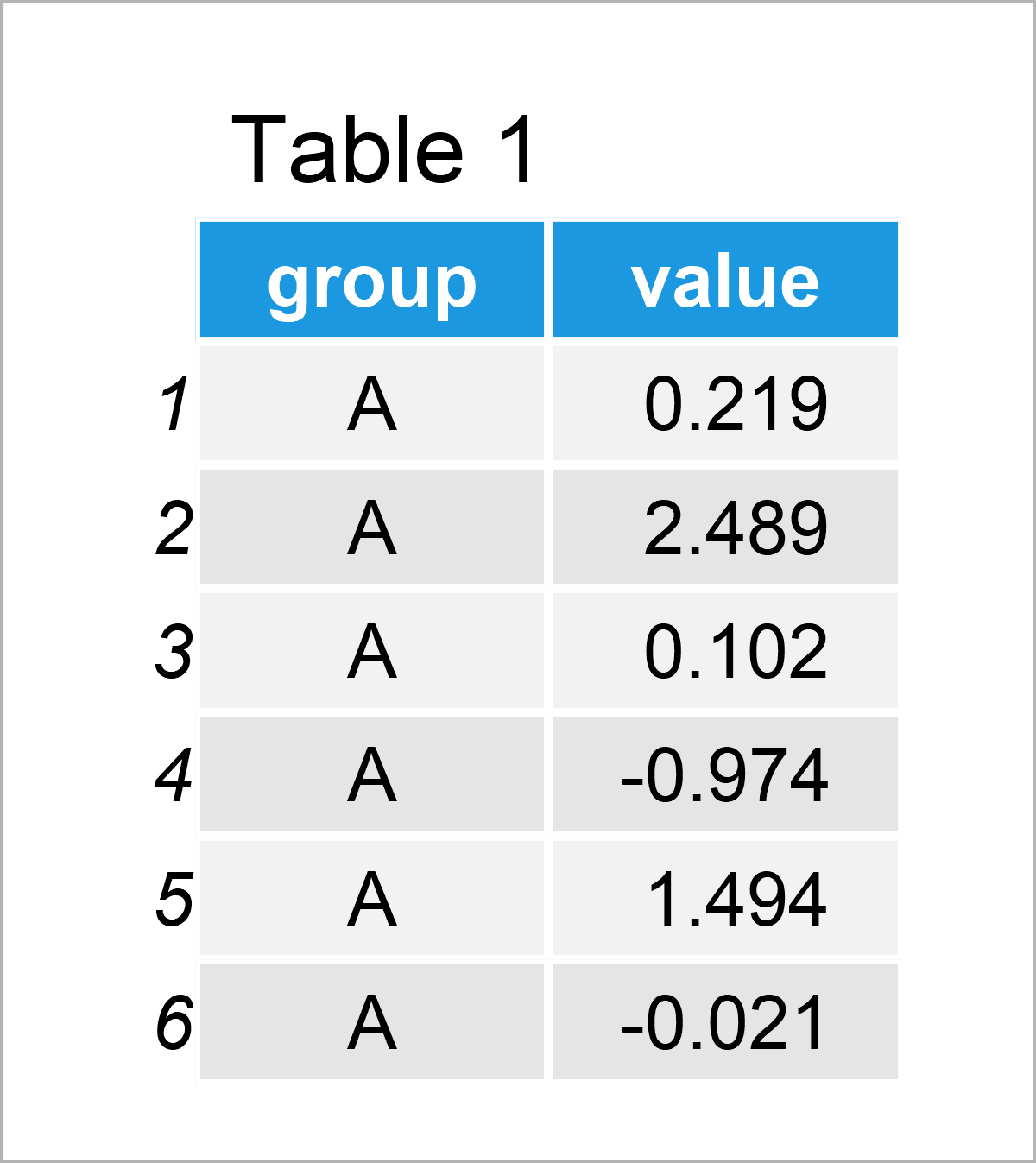 By running the previous R programming code, we have managed to create Table 1, i.e. a data frame containing 400 rows and the two columns called group and value.

In the next step, we can draw a boxplot without significance levels using the code below: 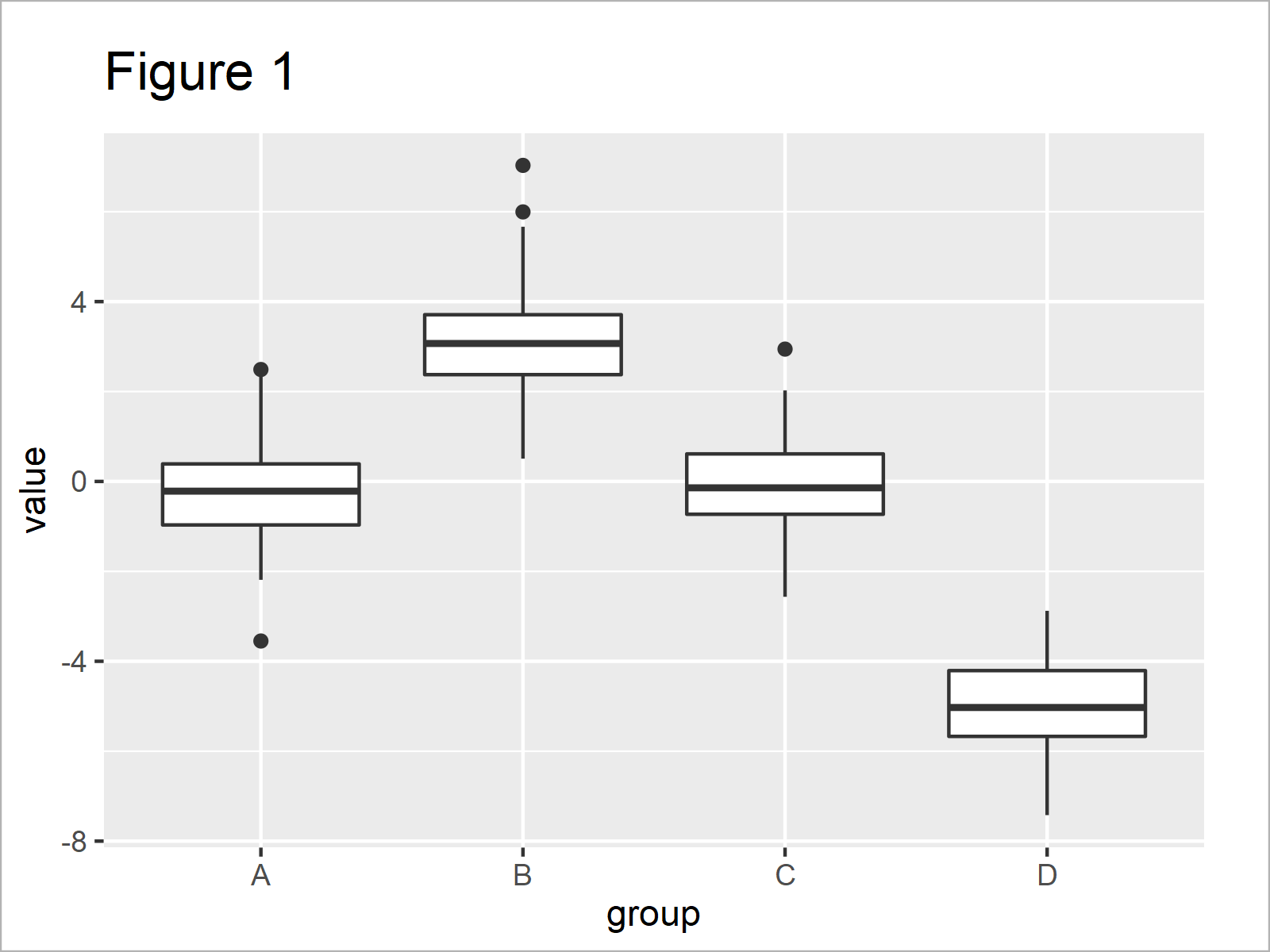 In Figure 1 you can see that we have plotted a boxplot showing the four groups in our example data in separate boxes.

Then, we first have to install and load the ggsignif package.

The ggsignif package, developed by Constantin Ahlmann-Eltze and Indrajeet Patil, allows you to enrich your ggplots2 graphs with group-wise comparisons. 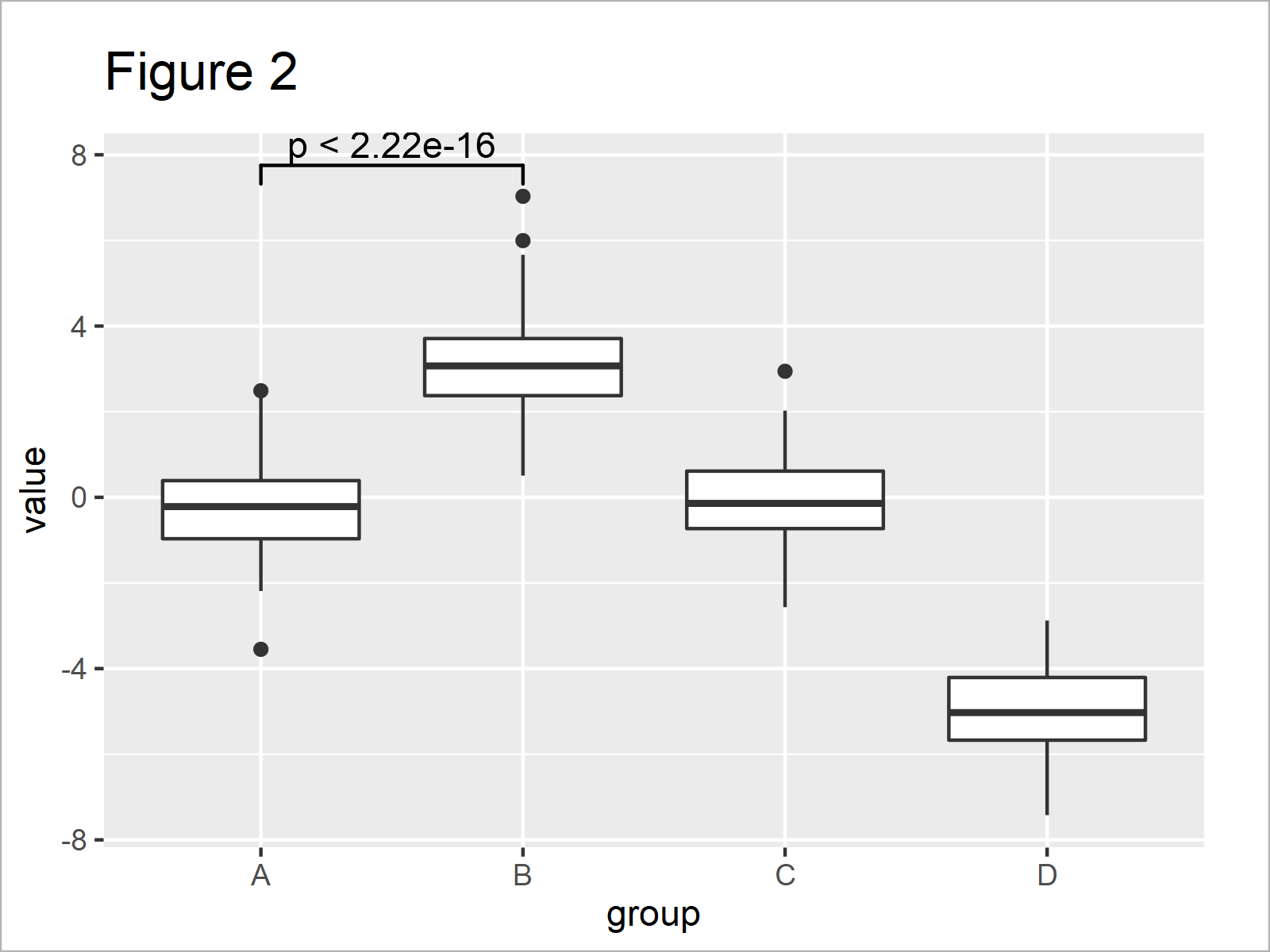 By executing the previous syntax, we have managed to create Figure 2, i.e. a ggplot2 boxplot with a significance level that compares the groups A and B.

In the previous plot, we have used the p-value to compare our groups. However, we may show significance stars instead by setting the map_signif_level argument to TRUE: 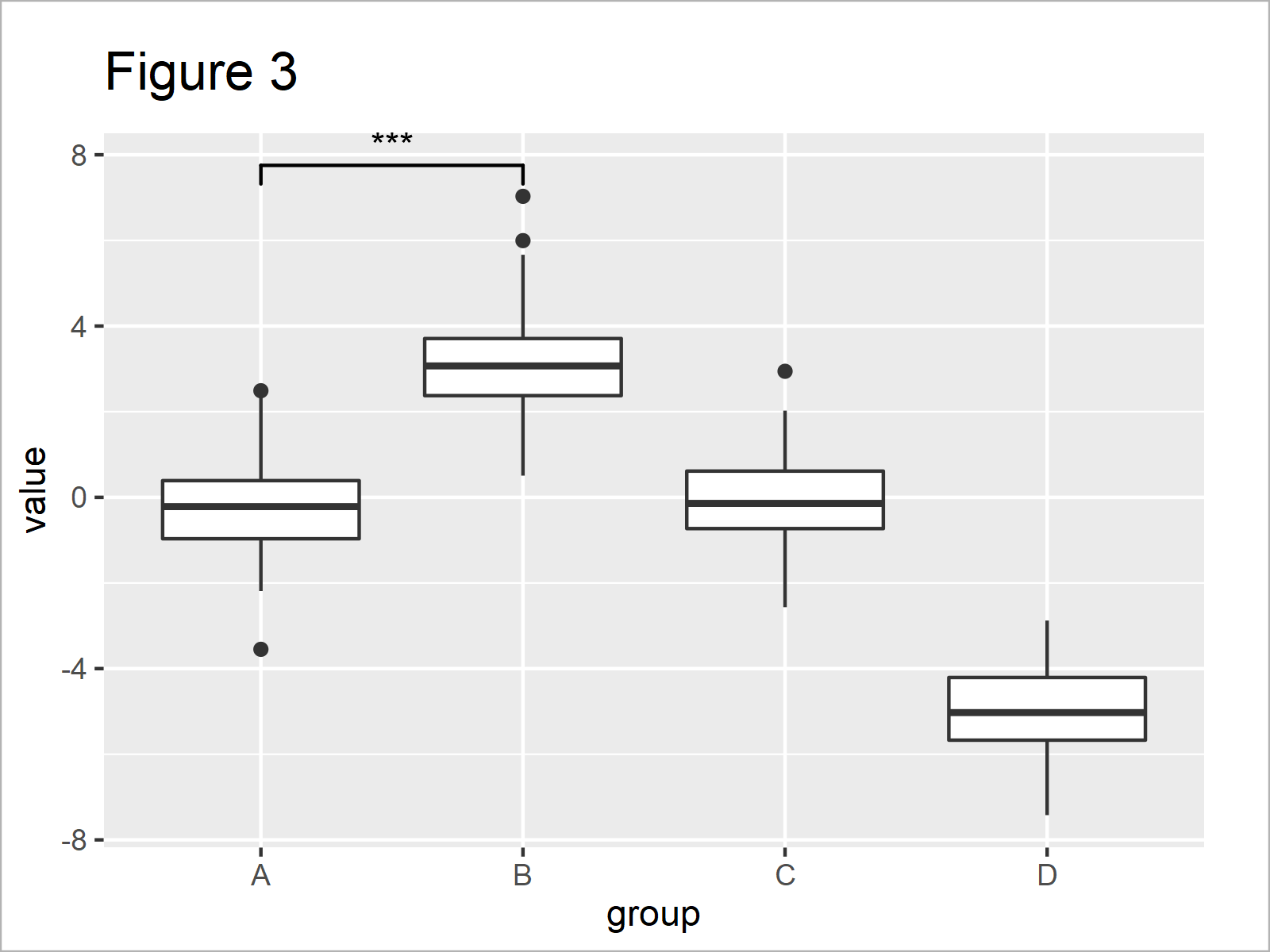 Figure 3 shows the output of the previous syntax – i.e. our boxplot with significance stars.

It is also possible to compare multiple groups at the same time. For this, we have to extend our comparison list, and to avoid a visual overlap we should also specify the y-axis positions where we want to show the significance stars: 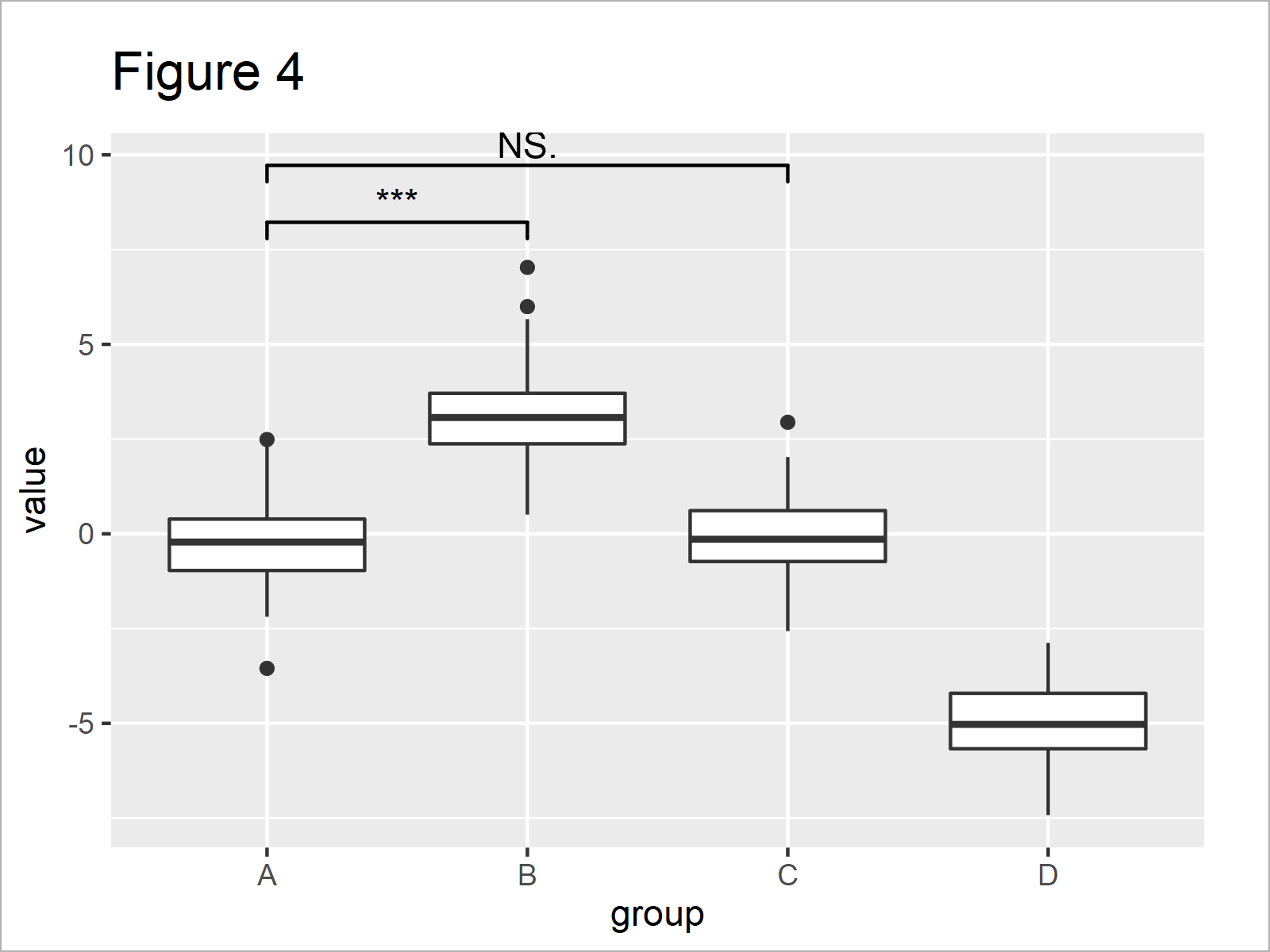 In Figure 4 you can see that we have created another version of our boxplot where the group A is compared simultaneously with the groups B and C.

The geom_signif function also enables the user to modify the design of the significance levels. For instance, we can change the color, line size, and text size as shown below: 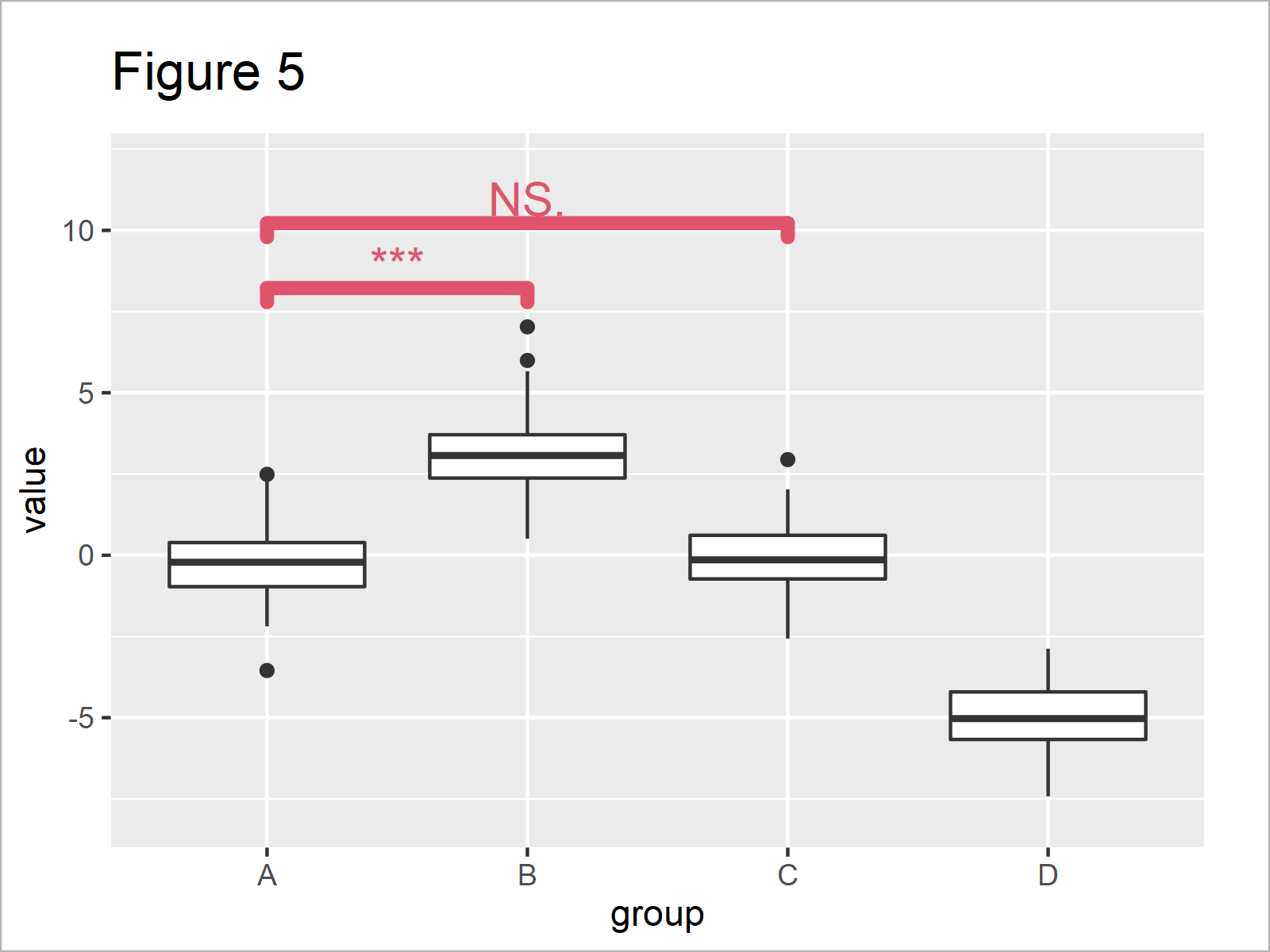 As you can see in Figure 5, we have increased the size of the significance levels, and we have changed the color to red.

Example 2 demonstrates how to use the ggsignif package to add significance comparisons to a barplot.

First, we have to create another example data set: 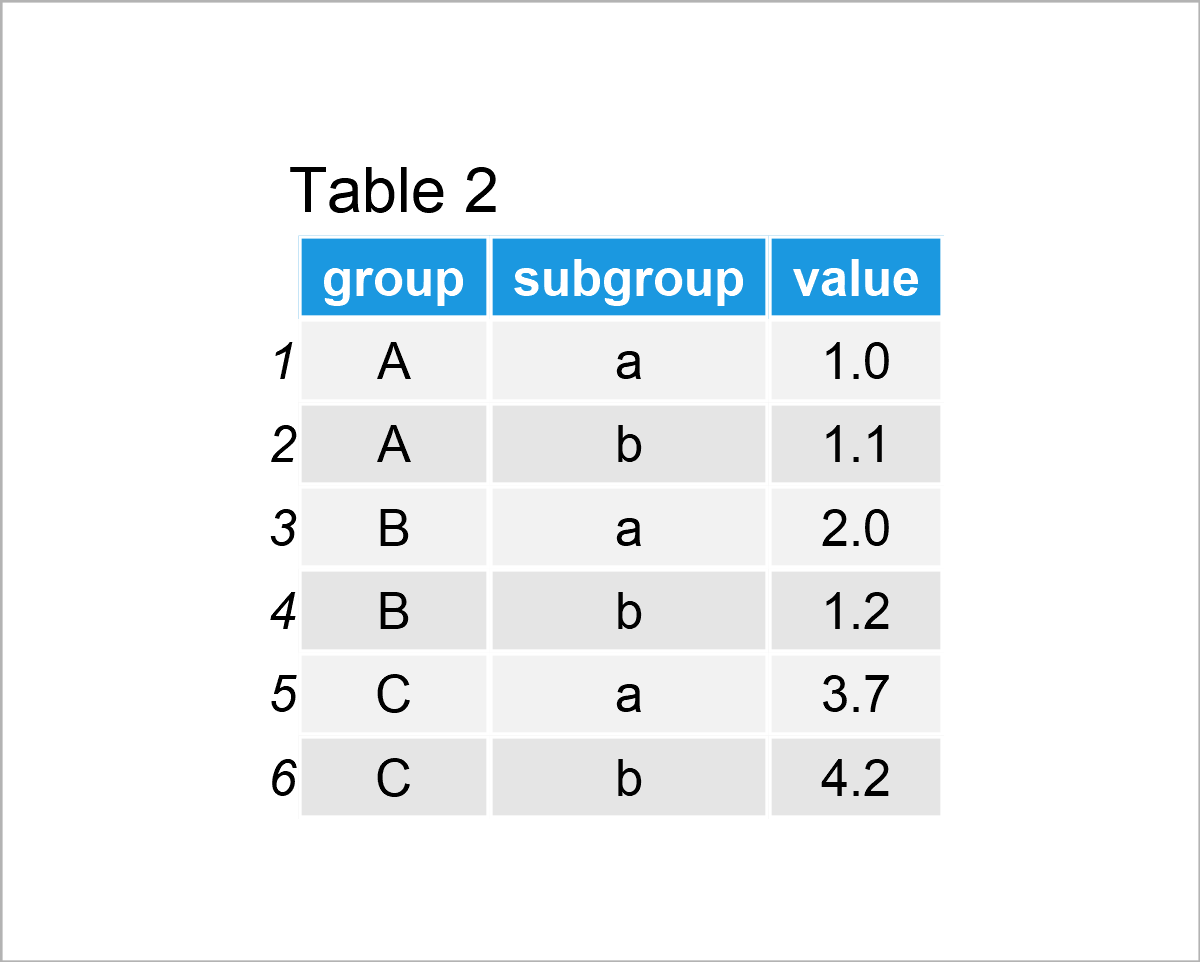 The output of the previous R syntax is visualized in Table 2: A data frame containing six rows and the variables group, subgroup, and value.

We can draw a grouped barchart of these data using the R syntax below: 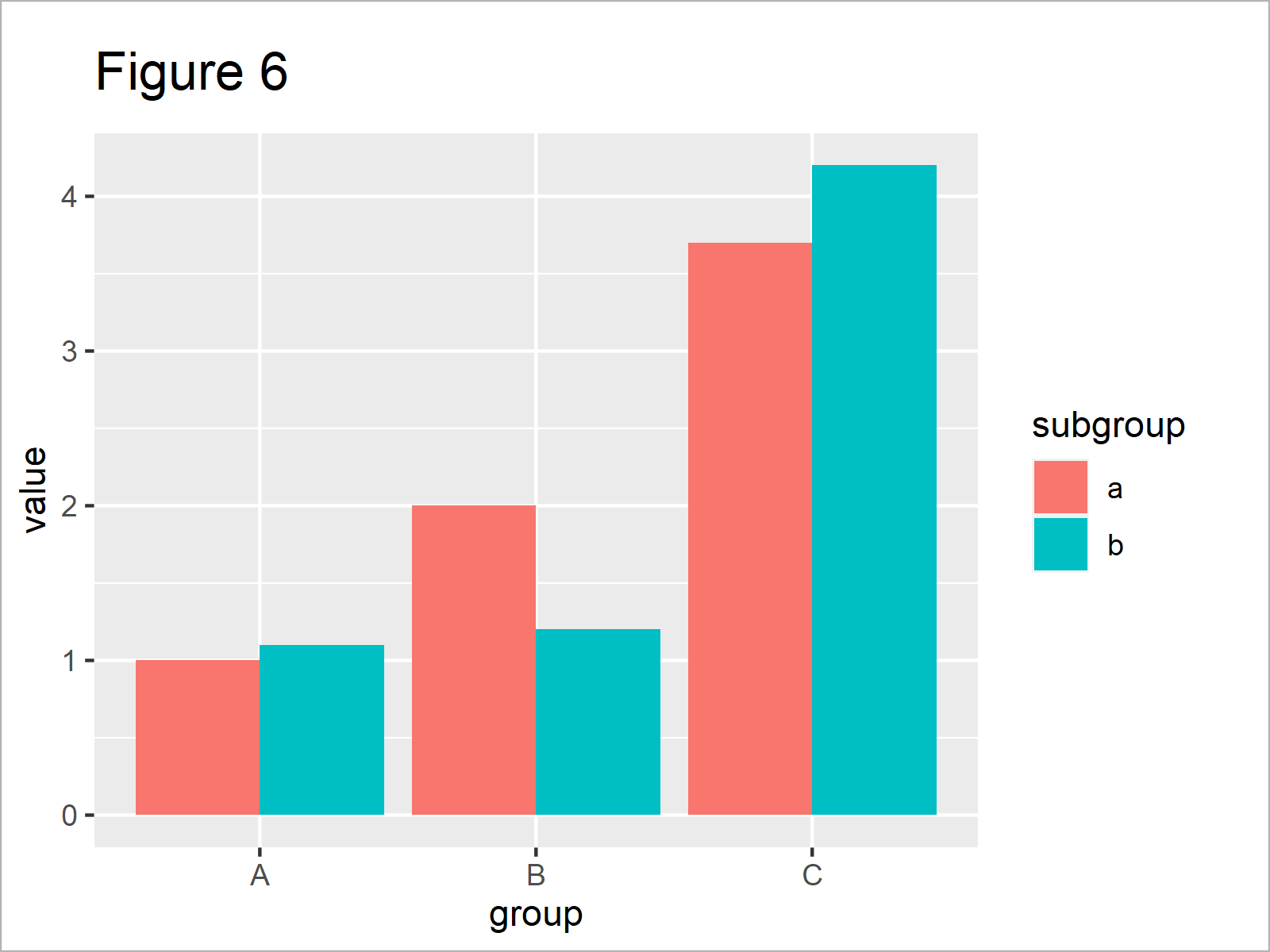 As revealed in Figure 6, the previous R syntax has created a grouped ggplot2 barchart.

Next, we can use the geom_signif function to annotate comparisons of the main groups to this graph: 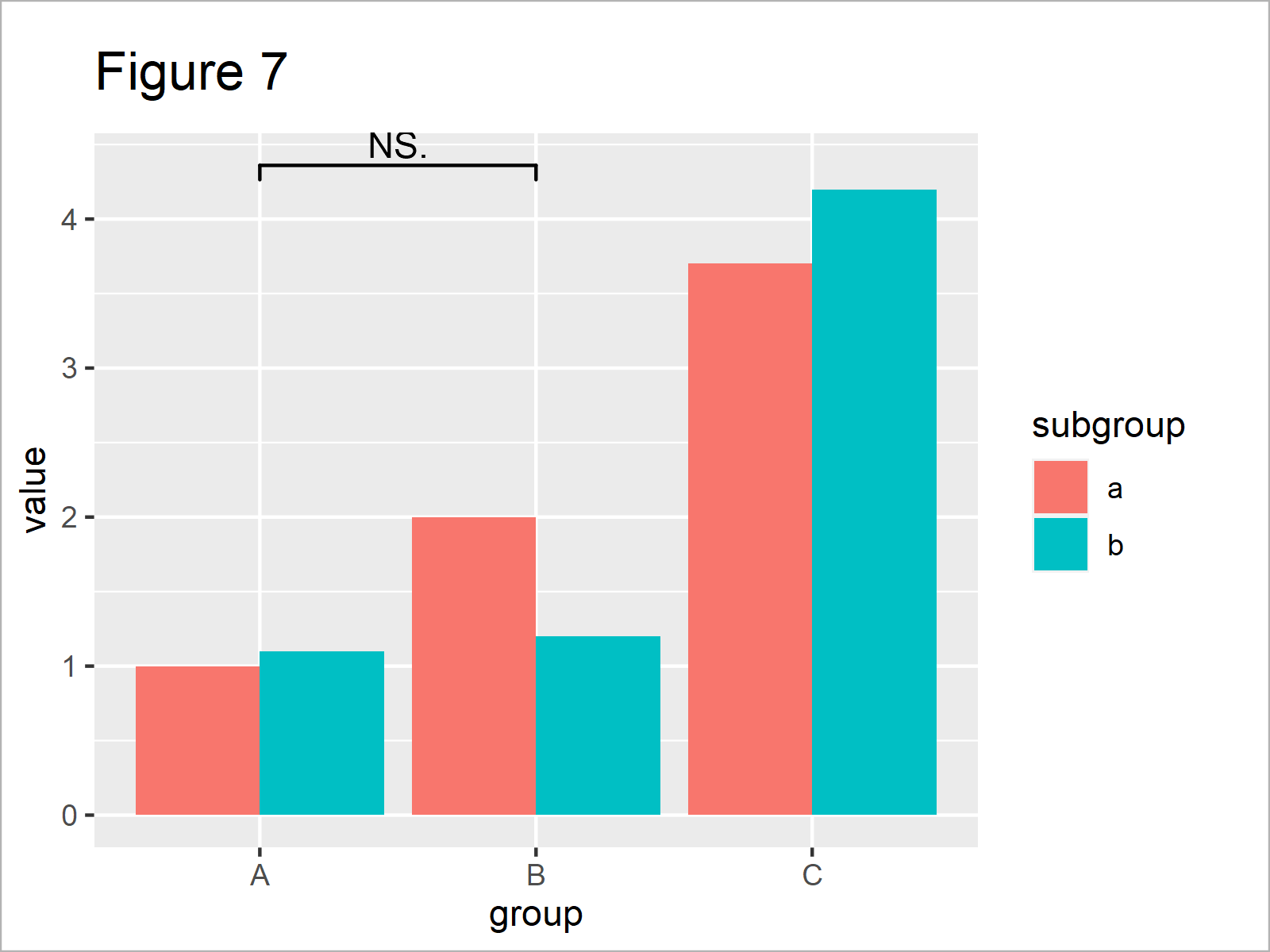 As shown in Figure 7, the previous R programming syntax has plotted a comparison between the main groups A and B on top of the previously created grouped barchart.

As you can see, this significance level indicates that the two groups are not significantly different. However, this non-significance might be due to the way how we have formatted our data.

Let’s assume that we know from a previously conducted data analysis that these two groups are, in fact, significantly different. Then, we might use the annotations argument within the geom_signif function to overwrite the default significance level: 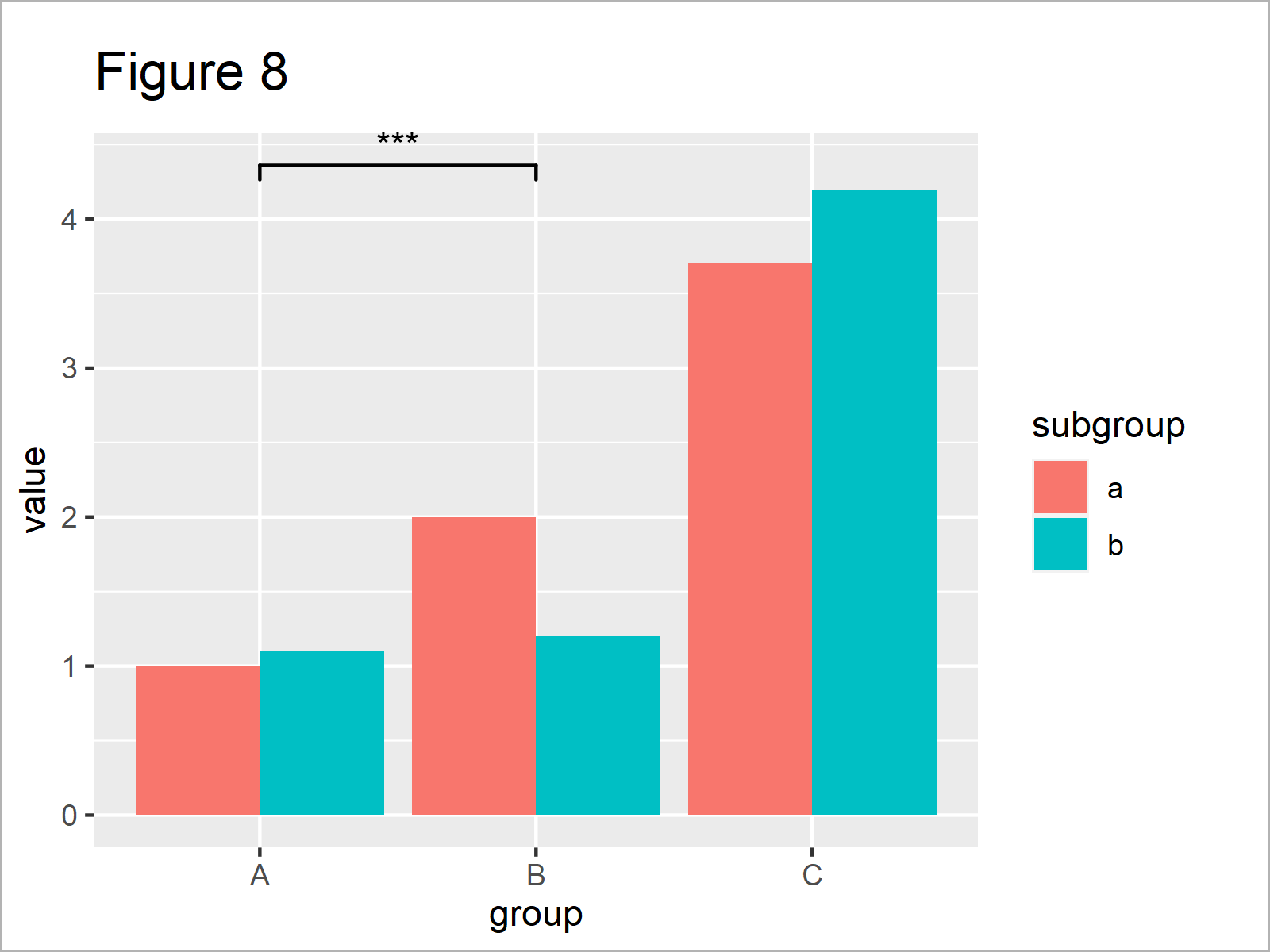 After executing the previously shown R code the barplot with significance stars shown in Figure 8 has been plotted.

So far, we have only compared the main groups in our barchart. However, it’s also possible to add significance comparisons for the subgroups.

To achieve this, we can apply the geom_signif function twice – once for the main groups, and once for the subgroups. 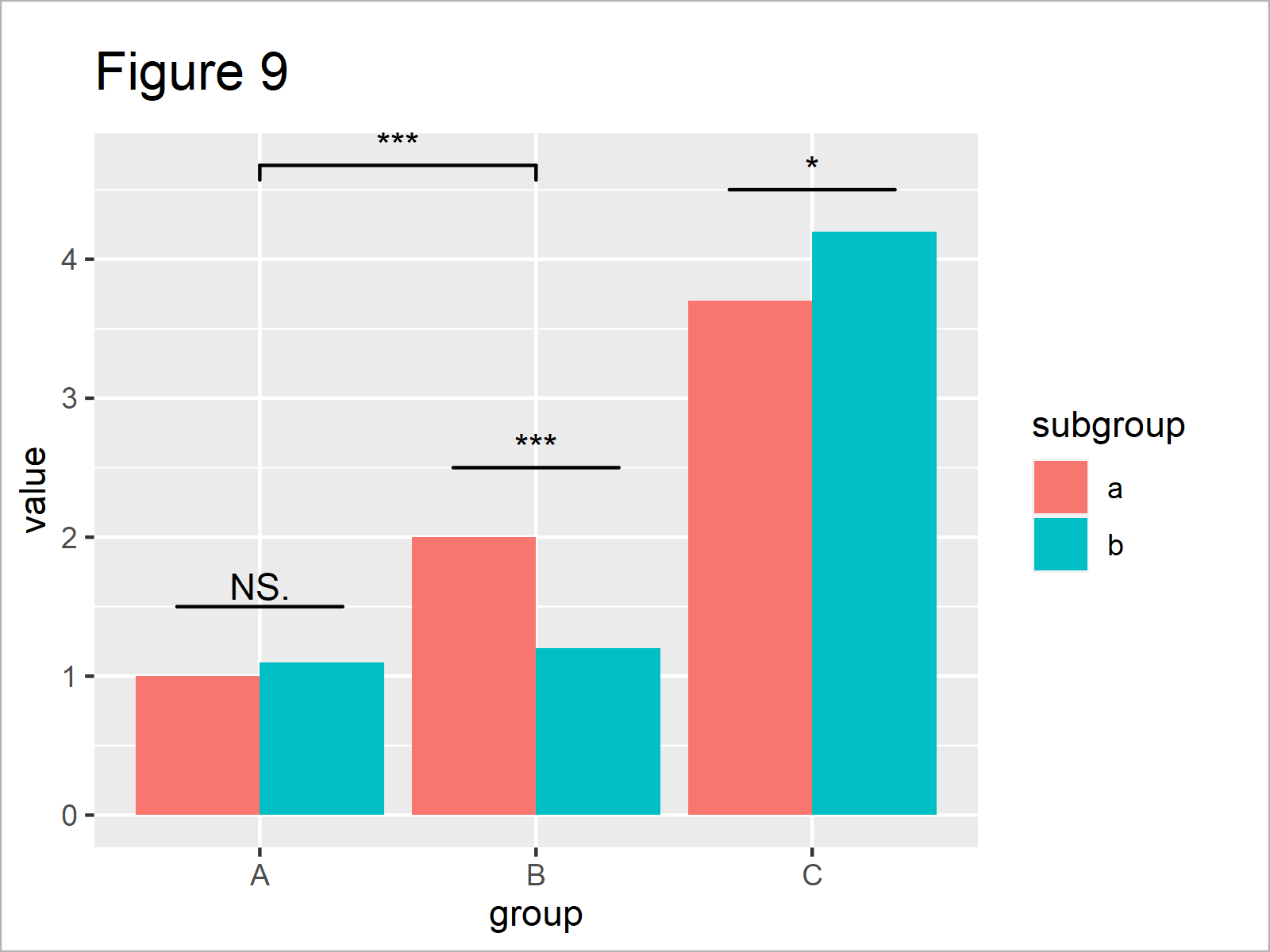 After running the previous R code the barplot you can see in Figure 9 has been created. We have drawn a comparison for the main groups A and B, as well as for all the subgroups.

Do you want to learn more about the annotation of significance levels to a ggplot2 graphic? Then I recommend watching the following video on my YouTube channel. I’m explaining the R codes of this page in the video.

In addition, you could have a look at some of the related tutorials which I have published on my homepage.

To summarize: In this R post you have learned how to put stars to a ggplot2 graphic to indicate the significance level. In case you have further questions, please tell me about it in the comments section. 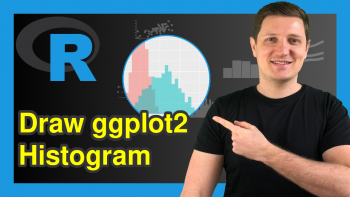 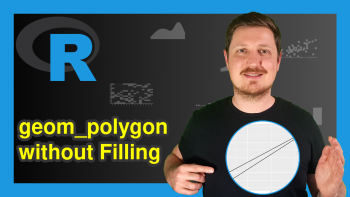