This post explains how to write and run for-loops in the R programming language.

Before we dive into the examples, let’s start with a quick theoretical introduction to for-loops…

I’ll first explain the workflow of for-loops. Have a look at the following graphic, it illustrates how for-loops work in theory: 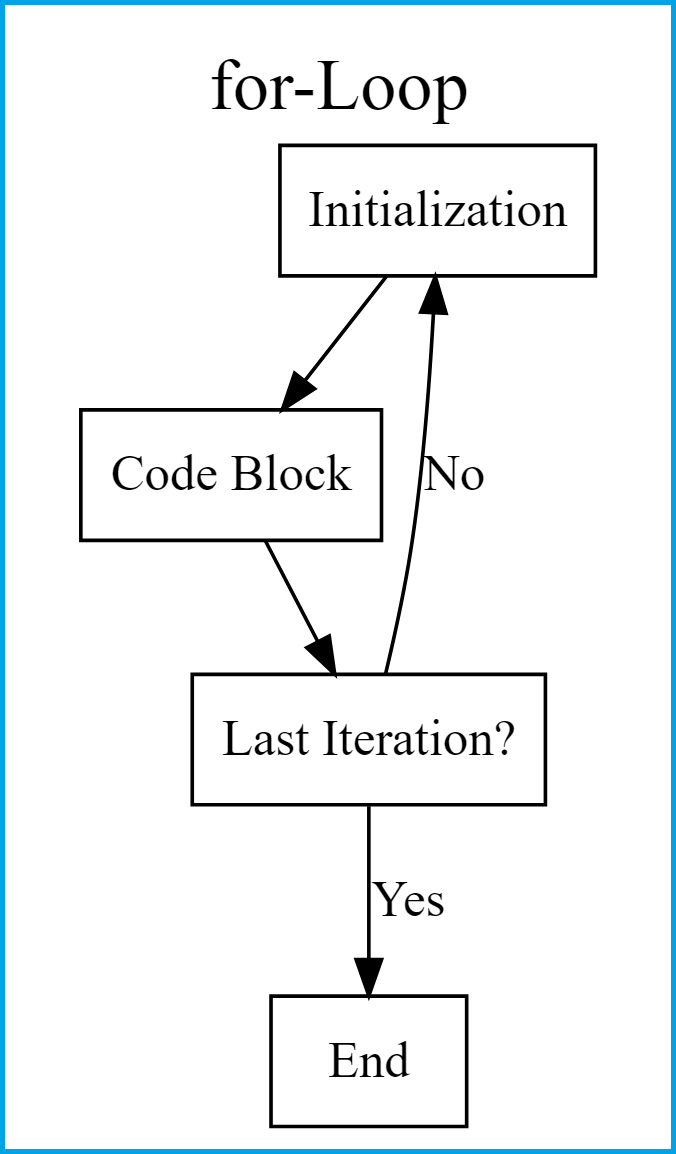 At the beginning of each for-loop is a head that defines a collection of objects such as the elements of a vector or a list.

The head is followed by a code block (i.e. the body of our loop). In this block we can execute basically any R syntax we want.

In the following, I’ll show you ten examples for the application of for-loops in R. So keep on reading!

In this Example, I’ll illustrate how to use for-loops to loop over a vector.

In the following R code, we are specifying within the head of the for-loop that we want to run through a vector containing ten elements from the first element (i.e. 1) to the last element (i.e. 10).

Within the body of the for-loop we are then creating an output called x1, which contains the index of our loop to the power of 2. We are printing the result of our code block in each iteration to the RStudio console.

Let’s have a look at the R syntax and its output:

As you can see, the previous R code returned ten values, i.e. one value for each iteration.

Please have a look at this tutorial in case you want to learn more about for-loops and vectors in R.

It is very important to understand that for-loops in R do not iterate over regular sequences, but over a collection of objects. For that reason, we are able to loop through vectors of character strings.

Let’s do an example in R! First, we have to create a character vector:

Now, we can loop over the elements of this character vector as shown below:

If you want to learn more about loops and character vectors, you can have a look here.

This Example shows how to concatenate the output of each for-loop iteration to a vector. For this task, we first have to create an empty vector:

Now, we can use the for-statement to create a vector of output values:

The resulting values are exactly the same as in the first example. However, this time we have saved the results in a vector object. You can learn more on this topic here.

for-loops are often used in nested loops. In Example 4, I’ll show how to nest a for-loop into another for-loop.

Let’s first create another empty vector (as in Example 3):

Now, we can use the following nested for-loop to create a vector were each vector element contains two (different) letters of the alphabet:

The letter combinations are created on the basis of the index positions of our two nested for-loops. If you want to know more about nested loops in R, you might check out this tutorial.

It is possible to specify a logical if-condition within a for-loop that stops the execution of the loop in case it is TRUE.

As you can see based on the previous output of the RStudio console, our for-loop was stopped when the index i was equal to 5.

Example 6: Continue to Next Iteration of for-Loop

Similar to Example 5, we can also skip a for-loop iteration using the next-statement. The following for-loop is skipped at the index positions 1, 5, and 7:

Please have a look at this tutorial in case you want to learn more on skipping iterations within for-loops.

In this Example, I’ll explain how to loop through the variables of a data frame. First, let’s load some example data:

Now, we can loop over the columns of our data frame using the ncol function within the head of the for-statement. Within the for-loop, we are also using a logical if-condition:

Let’s have a look at the updated data frame:

As you can see, we have added +1000 to each column that contained the character pattern “Width”.

Check out this tutorial, if you want to learn more about the looping over data frame columns and rows.

In Example 8, I’ll show how to create or change variable names within a for-loop. Again, let’s replicate our original data frame:

Now, we can apply the colnames and paste0 functions to create new column names for each of our data frame columns:

Let’s print the head of our updated data:

As you can see, the columns of our data frame are named with the prefix “new_” and their position within the data frame. Click here, if you want to learn more on renaming variables within loops.

for-loops can be very handy when you want to draw multiple plots efficiently within a few lines of code. Let’s assume that we want to draw a plot of each numeric column of the iris data frame. Then, we can use the following R code: 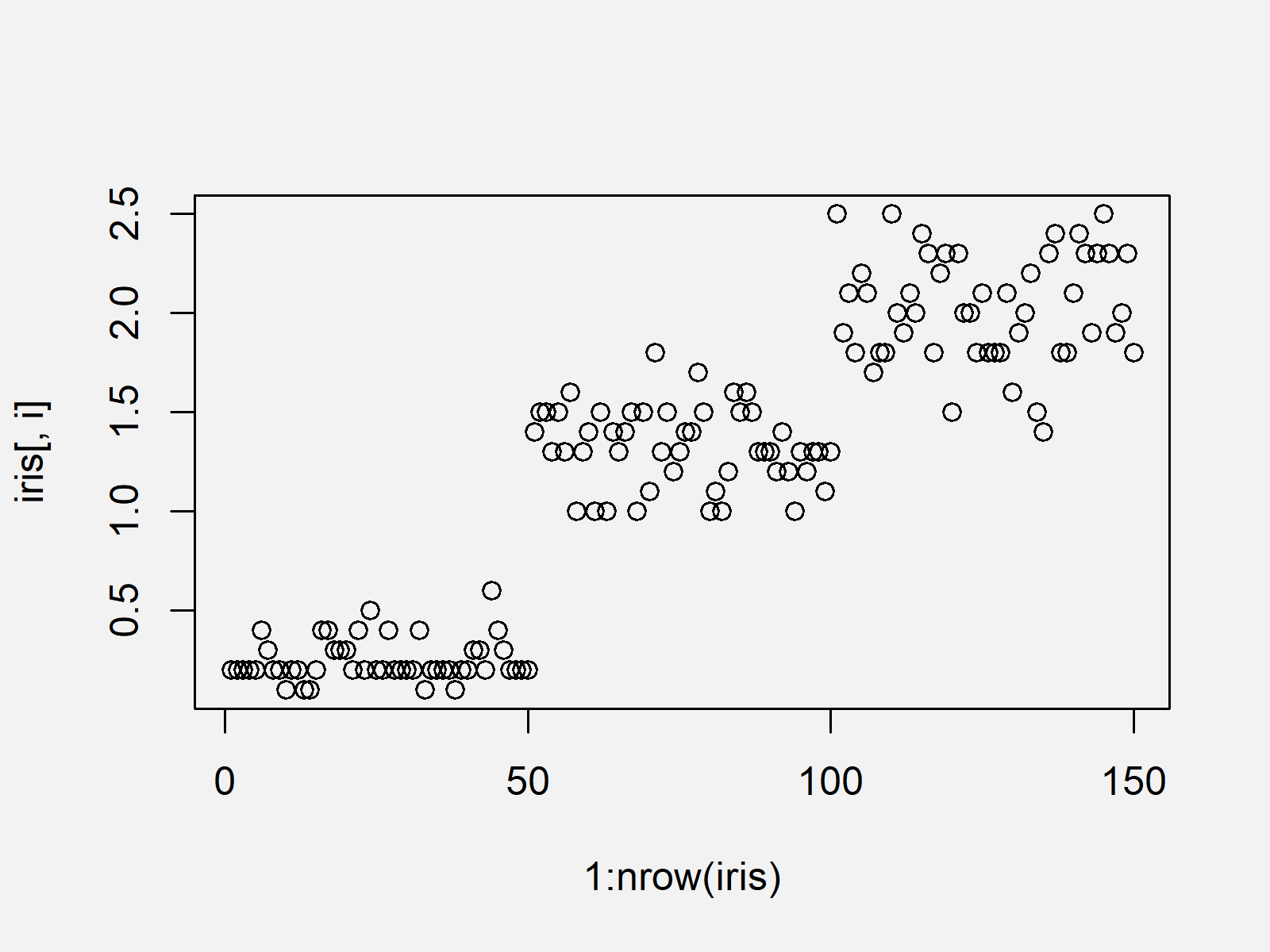 The final plot created by the previous R code is shown in Figure 1. Note that we have specified to wait 1 sec after drawing a graph. This can also be useful when you want to create GIF-files.

I have created a more advanced tutorial on plotting data in for-loops. This tutorials also covers the ggplot2 package – a very powerful package for graphics in R.

In the previous examples we have applied for-loops to vectors and data frames. However, in this Example I’ll show how to write and use for-loops for the manipulation of list objects.

Let’s have a look at the output:

As you can see, we have replicated each list element three times.

More on this topic can be found here.

Alternatives to for-Loops in R

As you have seen in this article, for-loops are a beautiful weapon of the R programming language.

However, a big drawback of for-loops can be their computation time when they are not applied properly. When applied to large data sets they can be very time consuming; sometimes they might even crash R entirely.

In order to write efficient for-loops, certain guidelines should be considered. Please have a look at the article by Uwe Ligges and John Fox in this publication for a detailed discussion on the performance of loops in R.

If you want to avoid for-loops in your R code instead, you may have a look at this tutorial in case you want to learn more about alternatives such as the lapply or map functions.

Do you need more explanations on the content of the present article? Then you might want to watch the following video of my YouTube channel. In the video, I illustrate the examples of this article in RStudio:

In addition, I can recommend to have a look at the other articles of my website. Especially, you may have a look at my overview article on loops in R. It lists all related tutorials on loops, statements, and user-defined functions:

Also, please have a look at my tutorials on while- and repeat-loops – the two other types of loops provided by the R programming language. Depending on your specific data situation, one of these loop-types may be better suited for you:

In summary: In this article you learned how to apply for-loops in different settings in the R programming language. In case you have additional comments or questions, don’t hesitate to let me know in the comments section. 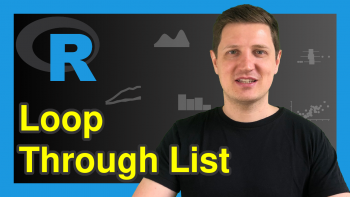 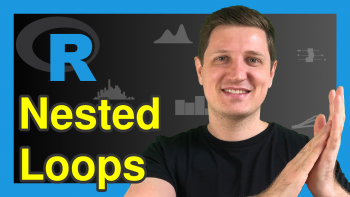