In this article you’ll learn how to loop over the variables and rows of a data matrix in the R programming language.

The article will consist of the following contents:

As a first step, I’ll have to create some data that we can use in the examples later on:

Have a look at the previous output of the RStudio console. It reveals that our example data has five rows and three columns. All variables are numeric.

In this Example, I’ll illustrate how to use a for-loop to loop over the variables of a data frame. First, let’s store our data frame in a new data object:

Now, we can use the for-loop statement to loop through our data frame columns using the ncol function as shown below:

Let’s check how our data frame has changed:

As you can see based on the previous output of the RStudio console, we added +10 to each variable of our data frame.

It is also possible to apply for-loops to loop through the rows of a data frame. Example 2 explains how to use the nrow function for this task. First, let’s replicate our data:

Now, we can apply the following R code to loop over our data frame rows:

In this example, we have subtracted -100 from each cell of our data matrix:

This Example explains how to loop over the columns of a data frame using a while-loop. Again, we are first replicating our data:

Then, we also have to specify a running index that we can increase with each iteration of our while-loop:

Now, we can start running our while-loop:

The result of the previous R syntax looks as follows:

As you can see, we have added +100 to the first two columns of our data. The third column was kept as in the original input data, since the while-loop stopped at the second column.

Similar to while-loops, we can also use a repeat-loop to loop over the variables of a data frame. Again, we have to replicate our data…

…and we have to specify a running index:

Now, we can write and run a repeat-loop as shown below:

We have specified that our repeat-loop should break after the second iteration and, hence, only the first two variables where changed:

Do you want to learn more about loops in R? Then you might have a look at the following video of my YouTube channel. I’m showing the examples of this article in the video:

Furthermore, you may want to read some of the related articles of my website. I have published numerous articles already:

Summary: In this R tutorial you learned how to loop through multiple columns and rows of a data table. Don’t hesitate to tell me about it in the comments section below, in case you have any additional questions. 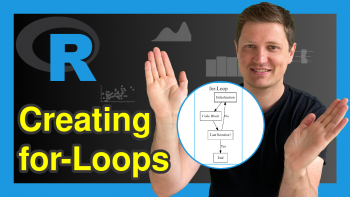