In this article you’ll learn how to remove rows containing missing values in the R programming language.

The article consists of six examples for the removal of NA values. To be more precise, the content of the tutorial is structured like this:

As you can see based on the previous output of the RStudio console, our example data frame consists of six rows and three columns. Each of the variables contains at least one NA values (i.e. missing data). The third row is missing in each of the three variables.

Have a look at the output of the RStudio console: Our updated data frame consists of three columns. None of these columns contains NA values.

The R programming language provides many different alternatives for the deletion of missing data in data frames. In Example 2, I’ll illustrate how to use the complete.cases function for this task:

The output is exactly the same as in Example 1. However, this time we have used the complete.cases function instead of the na.omit function.

Note that the complete.cases function has its name because it creates a complete data set without any missing values (sounds logical, doesn’t it?). The application of the complete.cases command is therefore sometimes called “listwise deletion“.

In this Section, I’ll illustrate how to use a combination of the rowSums and is.na functions to create a complete data frame.

The output is the same as in the previous examples. However, this R code can easily be modified to retain rows with a certain amount of NAs. For instance, if you want to remove all rows with 2 or more missing values, you can replace “== 0” by “>= 2”.

If you prefer the tidyverse instead of the functions provided by the basic installation of the R programming language, this example may be interesting for you.

In this Example, I’ll illustrate how to apply the drop_na function of the tidyr package to delete rows containing NAs.

We first need to install and load the tidyr package:

Now, we can use the drop_na function to drop missing rows as shown below:

So far, we have removed data lines that contain at least one missing value. In Example 5, I’ll show how to remove only rows were all data cells are NA. For this, I’m using the is.na function again (as in Example 3):

In this example, only the third row was deleted. Rows 2 and 6 were kept, since they do also contain non-NA values.

If we want to drop only rows were all values are missing, we can also use the dplyr package of the tidyverse.

If we want to use the functions of the dplyr package, we first need to install and load dplyr:

Note that the previous R code renamed the row names of our data ranging from 1 to the number of rows of the updated data set.

Would you like to learn more about removing missing data? Then you could watch the following video of my YouTube channel. I’m explaining the examples of the present tutorial in the video:

Besides that, you may read the related tutorials of my website:

This article explained how to extract NA rows of a data frame in R. Please let me know in the comments, if you have additional questions. 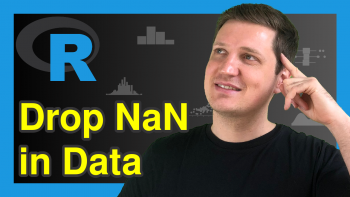 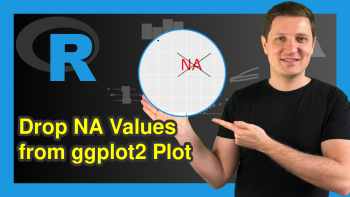