In this tutorial, I’ll show how to exchange specific values in the columns of a data frame based on a logical condition in R.

So without further ado, here’s how to do it!

As a first step, we’ll have to create some data that we can use in the examples below:

Let’s exchange some of the values in our data conditionally!

The following R programming syntax illustrates how to perform a conditional replacement of numeric values in a data frame variable. Have a look at the following R code:

As you can see based on the previous output, we have replaced the value 1 by the value 99 in the first column of our data frame.

This Example illustrates how to insert new values in character variables. The syntax is basically the same as in Example 1. However, this time the values should be wrapped with quotation marks:

Example 3 shows how to replace factor levels. The exchange of values in factors is slightly more complicated as in case of numeric or character vectors. If you would use the code shown in Examples 1 and 2, the following Warning would be shown:

For that reason, we have to convert our factor column to the character data type first:

Now, we can apply the same code as in Example 2:

And finally, we can convert the character variable back to the factor class:

Let’s have a look at the new data:

It is also possible to replace a certain value in all variables of a data frame. The following R code shows how to do that:

We just replaced the value 3 by 777 in all columns of our data matrix.

I have recently published a video on my YouTube channel, which explains the R syntax of this tutorial. Please find the video below.

In addition, you might have a look at the related articles of my homepage.

In this R tutorial you learned how to replace certain data frame values. Please let me know in the comments section, if you have any additional questions. Furthermore, don’t forget to subscribe to my email newsletter in order to get updates on the newest tutorials. 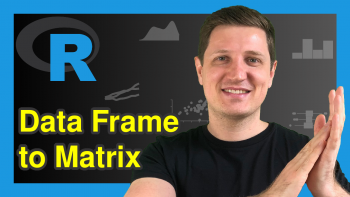 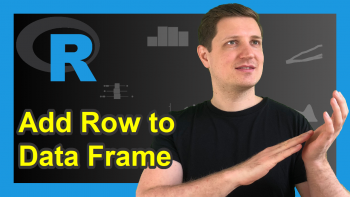