In this R tutorial you’ll learn how to return the first or last part of a data object using the head and tail functions. 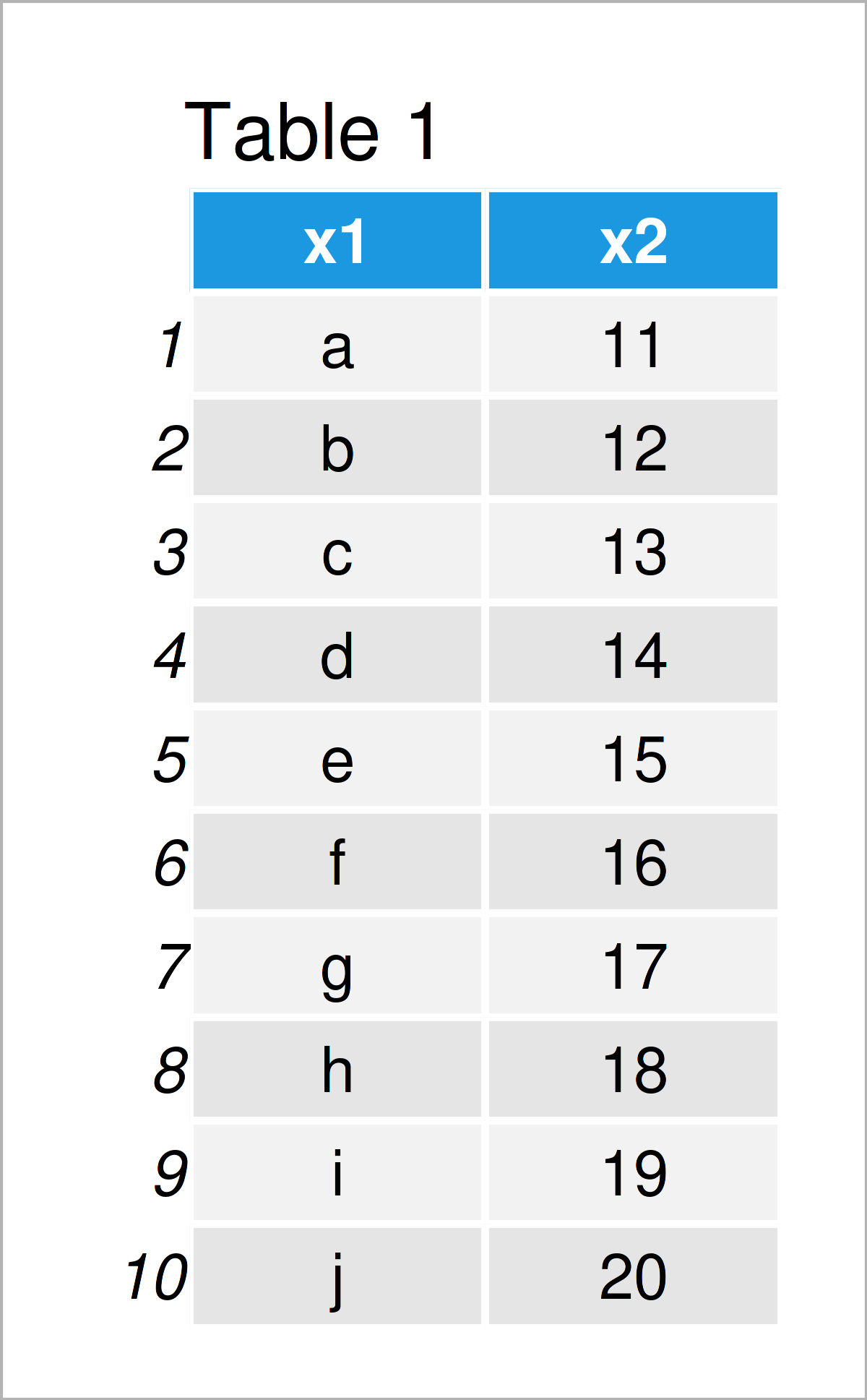 Have a look at the table that has been returned by the previous R syntax. It shows that our example data frame is made up of ten rows and two columns.

In Example 1, I’ll demonstrate how to apply the head function with its default specifications to return the first six rows of a data frame object.

For this, we simply have to specify the name of the data frame within the head function: 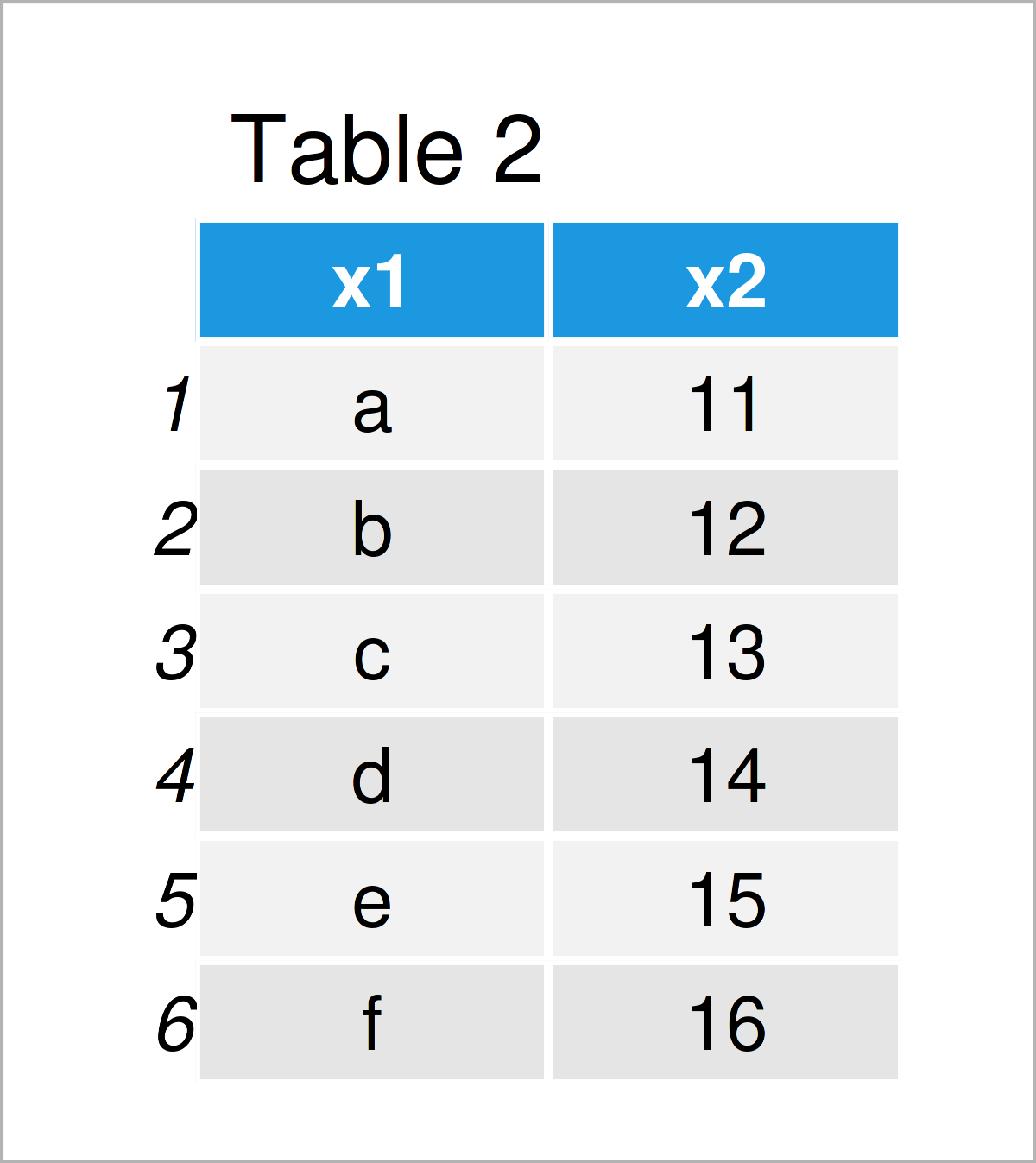 In Table 2 it is shown that we have created a new data frame output containing the top six rows of our data set by running the previous R syntax.

In Example 2, I’ll illustrate how to select a particular number of rows from the top of a data frame object.

Top achieve this, we have to specify the number of rows we want to retain in addition to the name of the data matrix: 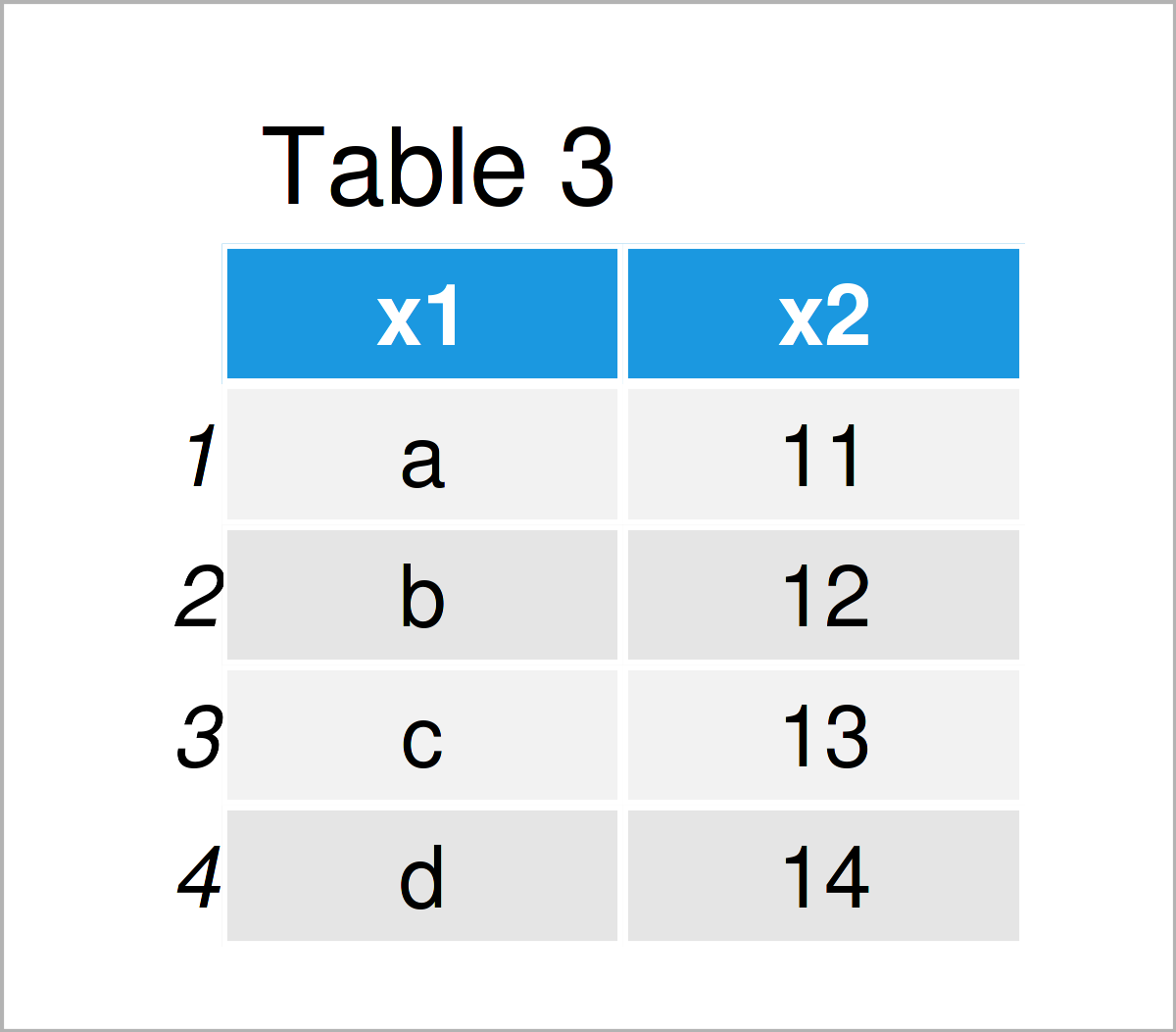 By running the previously shown R syntax we have created Table 3, i.e. a data frame containing the first four rows of our input data.

Similar to the head function, we can use the tail function to get the last six rows of a data frame object: 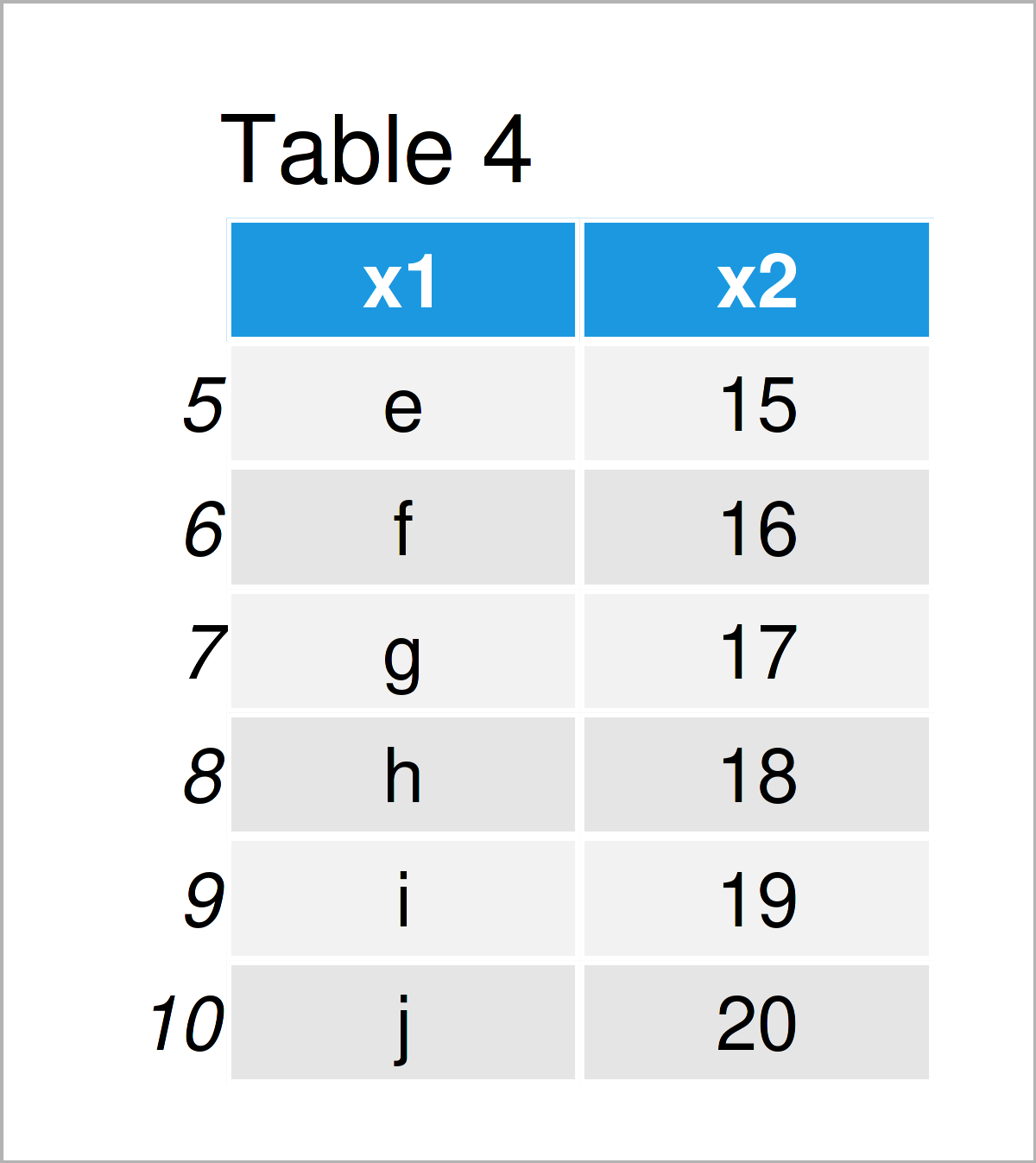 In Table 4 you can see that we have created a data frame consisting of the last six rows of our data with the previous R code.

This example illustrates how to extract a specific number of lines from the bottom of a data matrix.

For this, we have to specify the number of rows we want to select within the tail function: 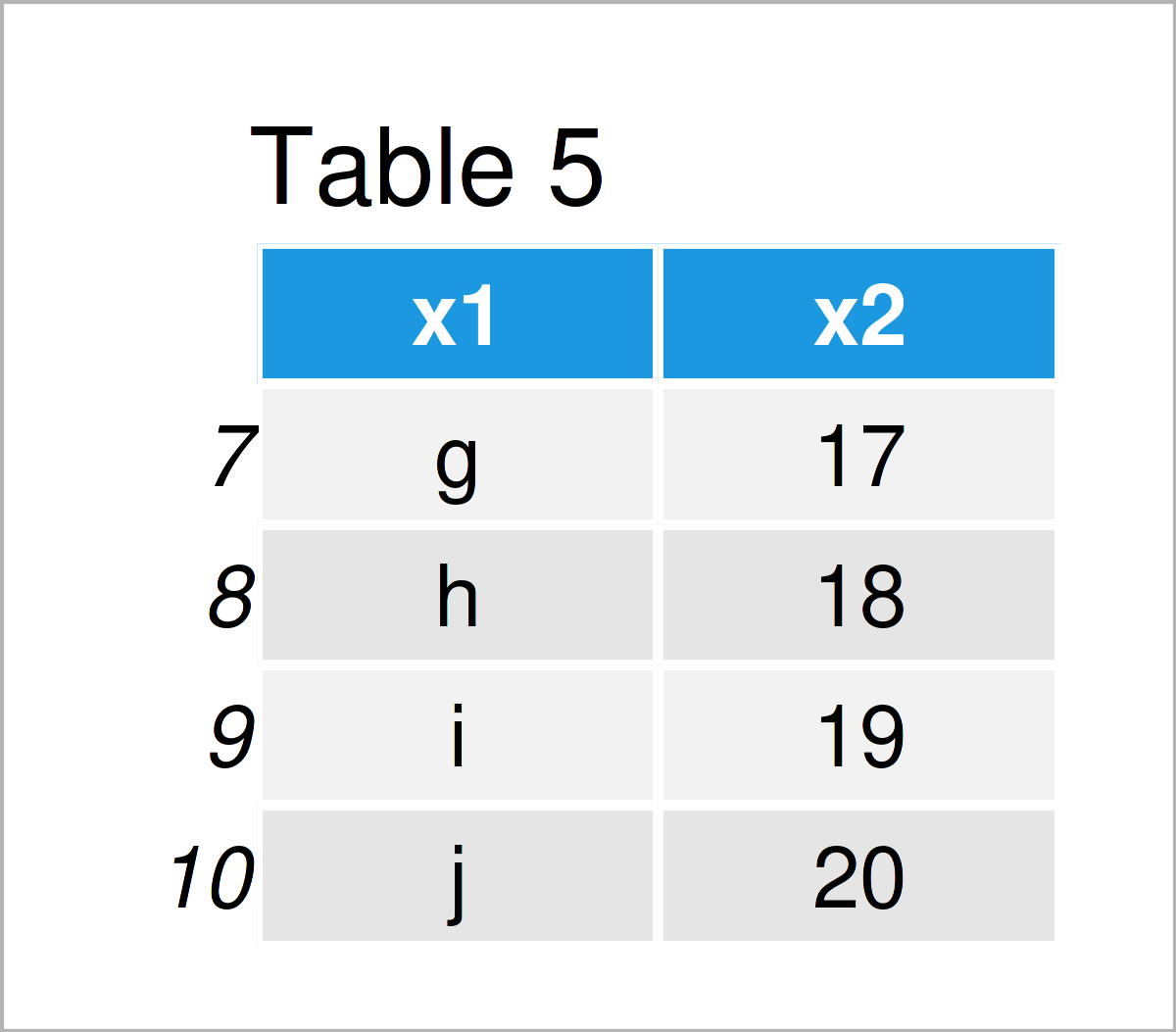 Table 5 shows the output of the previous code – We have returned the bottom four rows of our data frame.

So far, we have applied the head and tail functions only to data frame objects.

This example explains how to apply the head and tail functions to vector objects.

Next, we can apply the head function to grab the first six elements of this vector…

…or the tail command to select the last six values in our vector:

In Example 6, I’ll illustrate how to apply the head and tail functions to list objects.

Similar to the previous examples, we simply have to specify the name of this list within the head function to return the first elements (i.e. 2)…

…or the last elements:

Do you need further info on the R code of this tutorial? Then you may want to watch the following video on my YouTube channel. In the video, I illustrate the R programming syntax of this tutorial in RStudio.

In summary: You have learned in this post how to apply the head and tail functions in the R programming language. If you have any additional questions, please tell me about it in the comments. 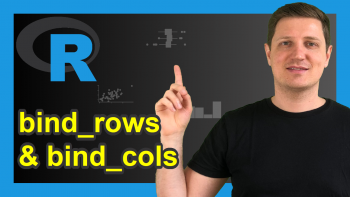 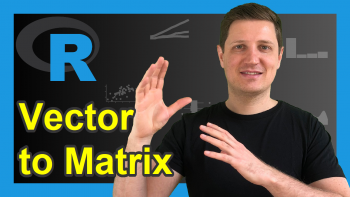