This article shows how to draw a graphic with an arrow in the R programming language. 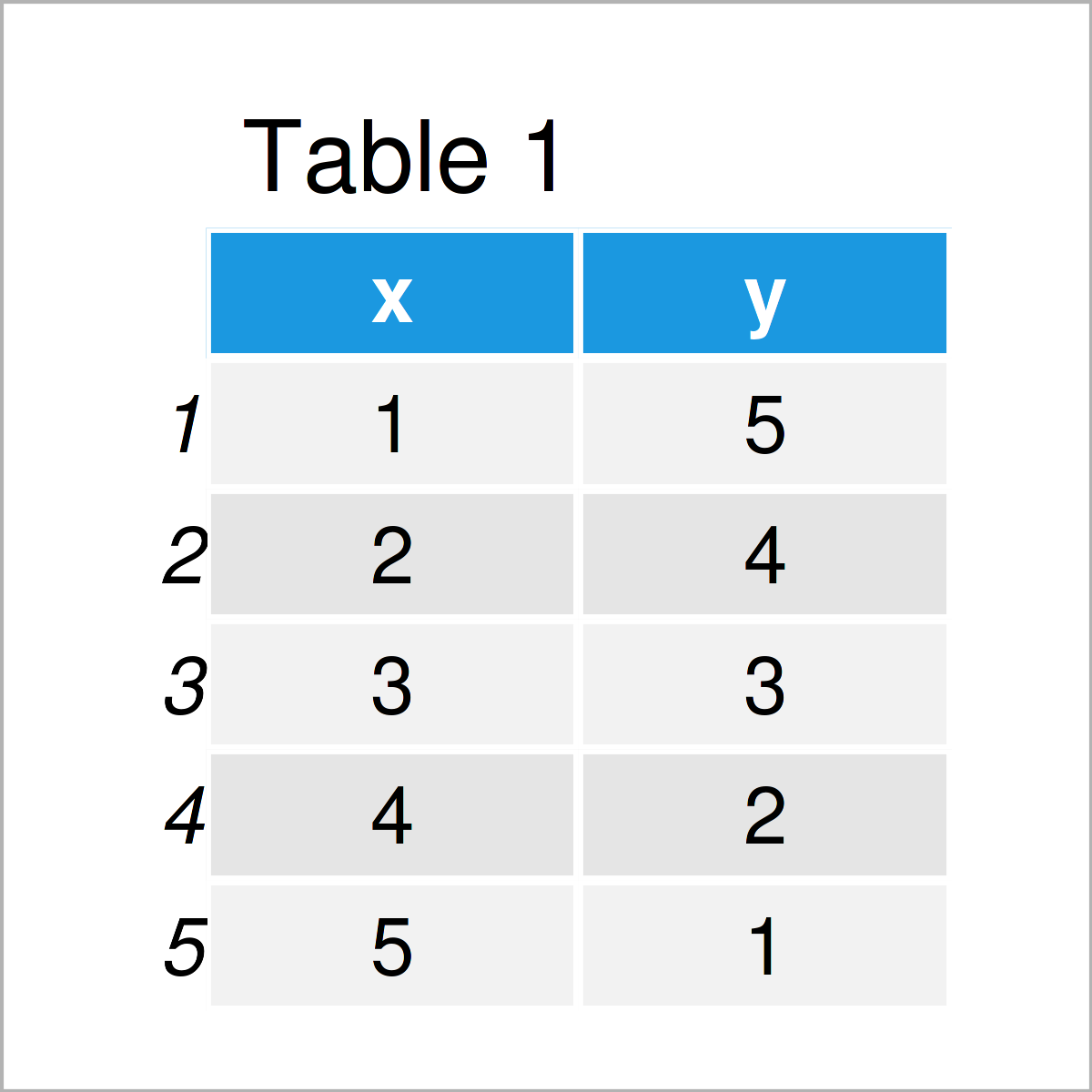 As you can see based on Table 1, our example data is a data frame comprising five rows and two integer columns with the names “x” and “y”.

Example 1 illustrates how to add an arrow to a Base R plot. 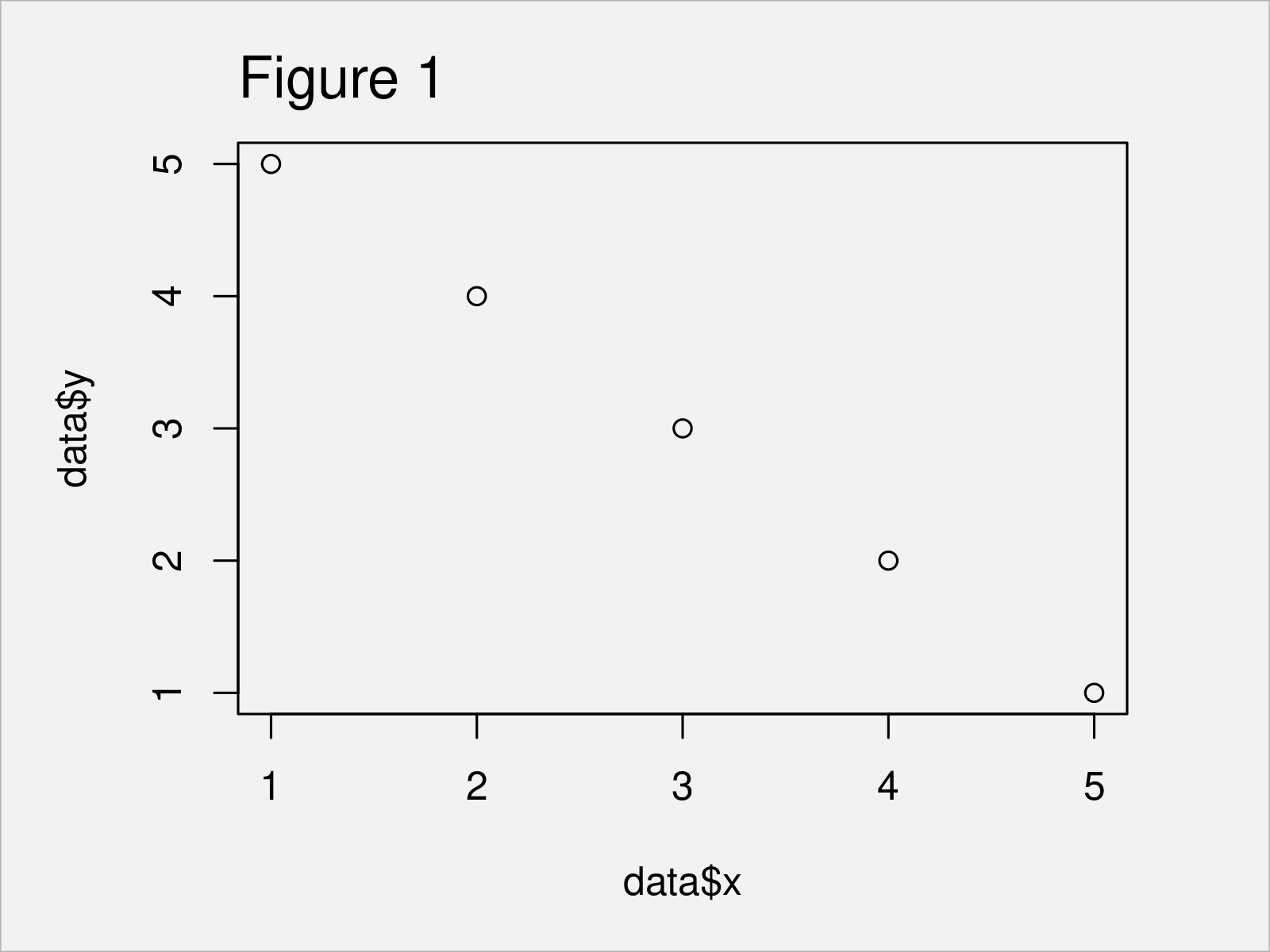 As shown in Figure 1, we have created a scatterplot without an arrow with the previous R syntax.

If we would like to add an arrow to this plot, we could apply the arrow function as shown below: 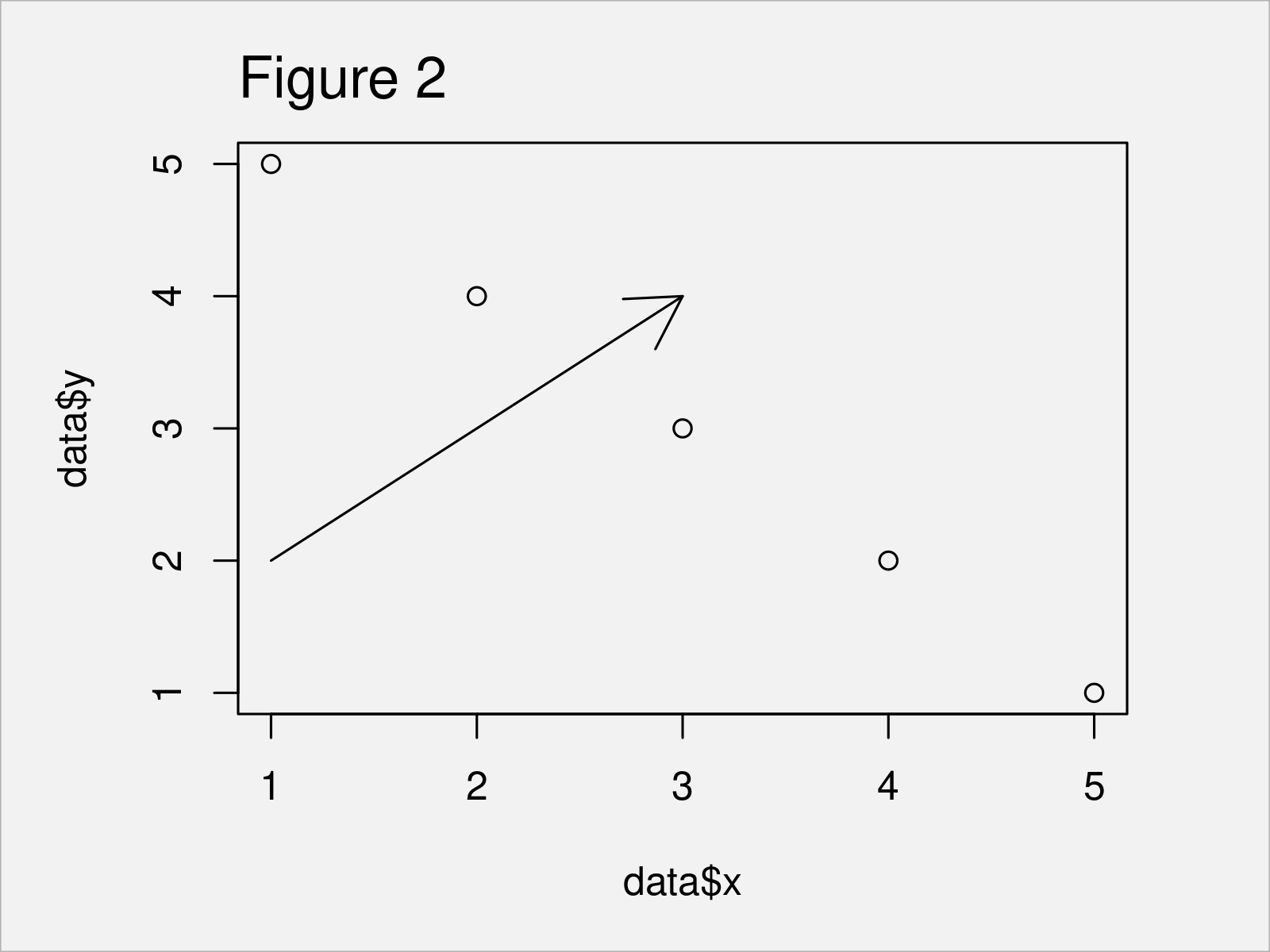 In Figure 2 it is shown that we have created a scatterplot with arrow by running the previous R programming code.

In this section, I’ll illustrate how to draw a ggplot2 plot with an arrow.

Next, we can draw a ggplot2 scatterplot without arrow as shown below: 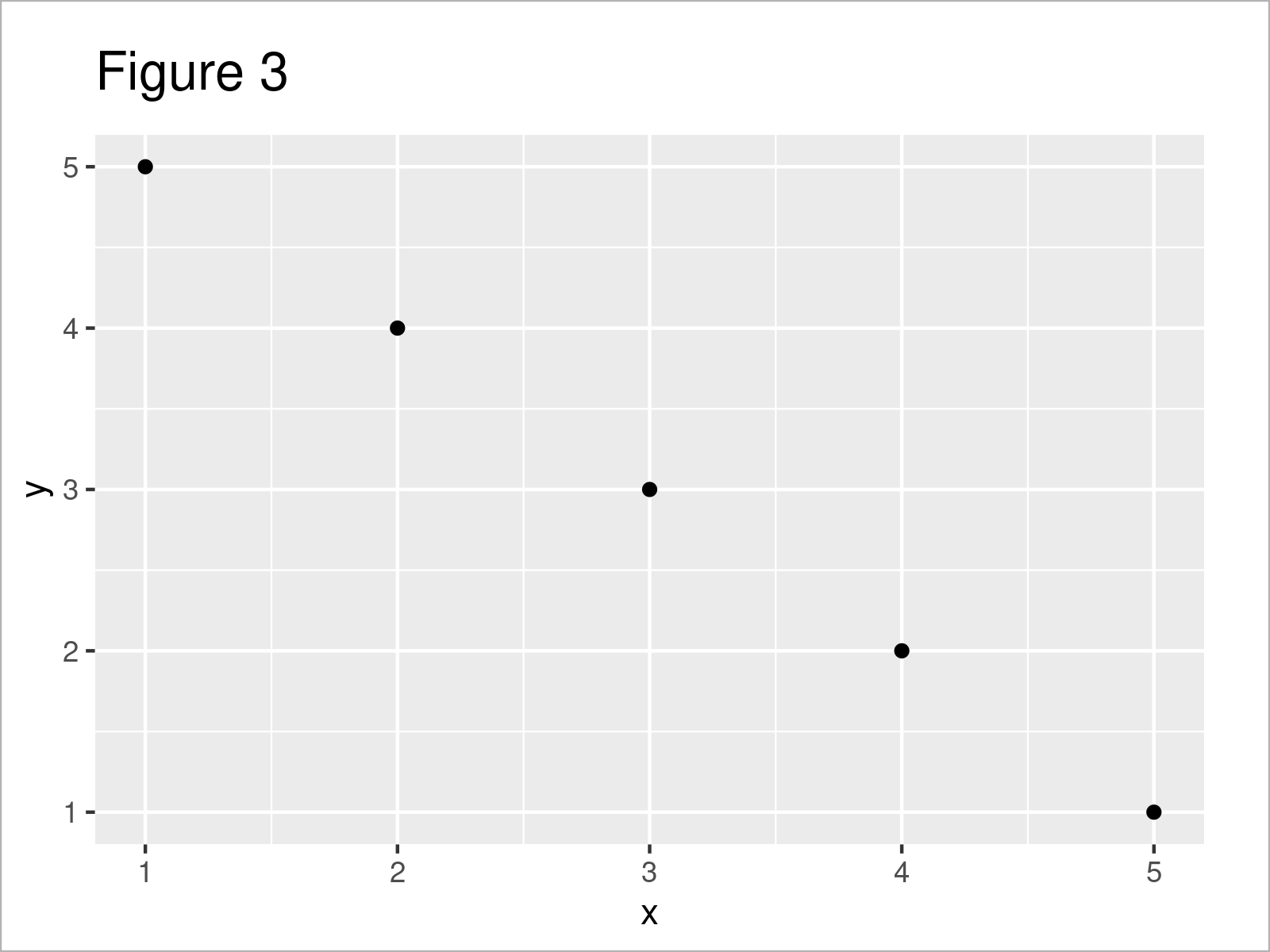 Note that the previous R code has created a plot object called ggp.

In the next step, we can use this plot object as basement for the geom_segment function. Within this function, we can specify the coordinates of the arrow that we want to create: 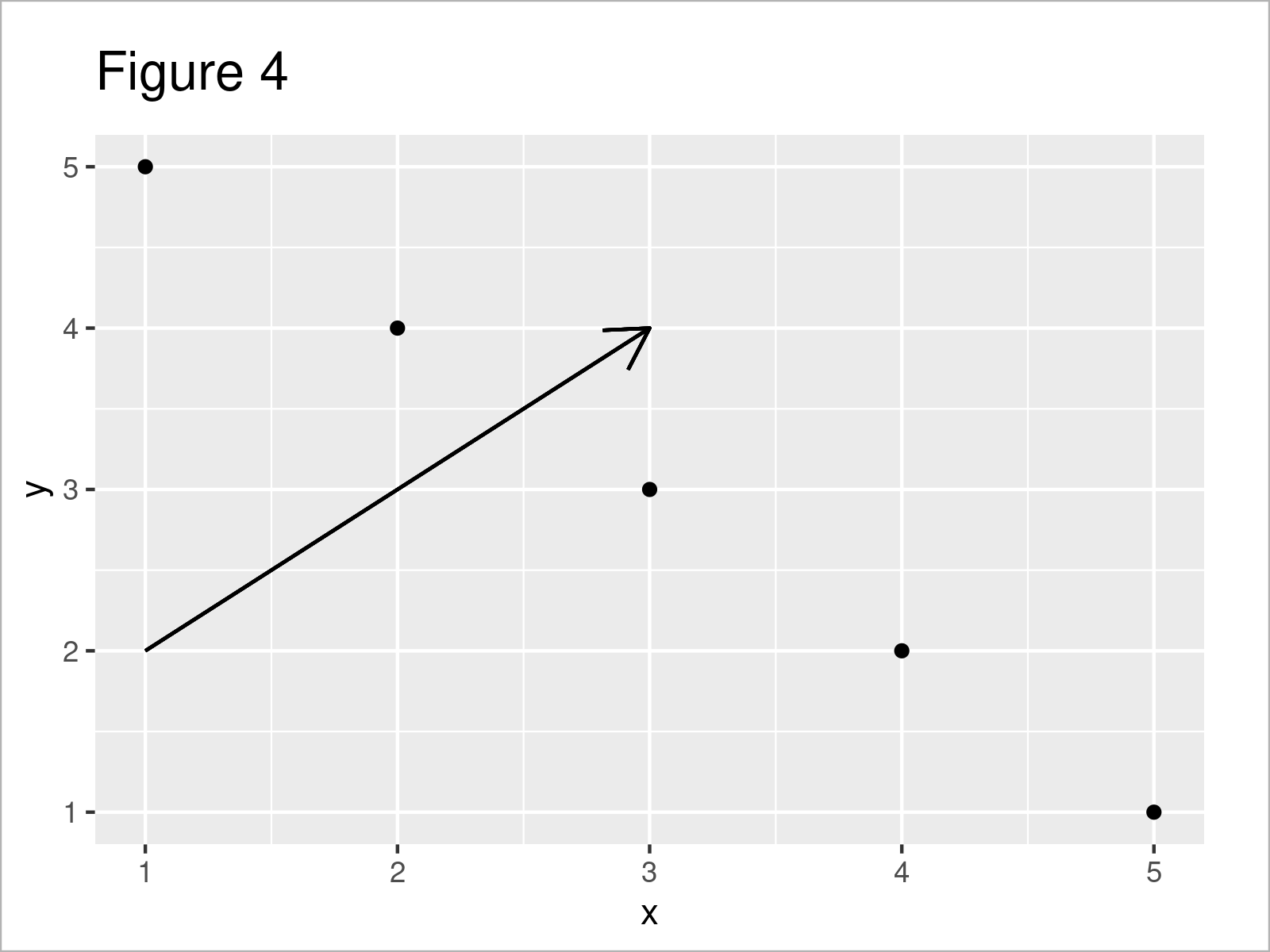 As shown in Figure 4, the previous R syntax has drawn a ggplot2 plot with an arrow.

If you need further instructions on the R programming codes of this article, I recommend watching the following video on my YouTube channel. In the video, I’m explaining the content of this tutorial:

In addition, you may want to have a look at some of the other tutorials on this website.

In this R tutorial you have learned how to add a nice and beautiful arrow to a graph.

Please note that it would be possible to modify the attributes of these arrows such as the shape, size, color, and line type. Have a look at the corresponding help documentations for more info.

If you have additional questions, tell me about it in the comments section below. 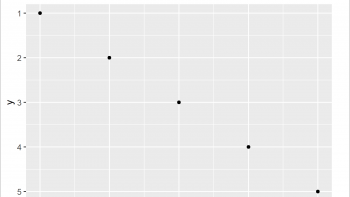 Reverse Axis Limits of Plot in Base R & ggplot2 (2 Examples) 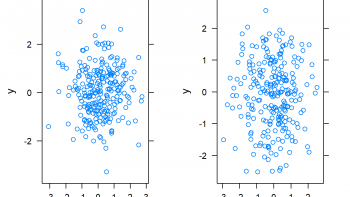 Draw Multiple lattice Plots in One Window in R (Example)