In this tutorial you’ll learn how to compute the time difference between two variables of a pandas DataFrame using the Python programming language.

The structure of the tutorial is shown below:

Without further ado, let’s dive into it!

As a first step, we have to import the pandas library as well as relativedelta from the dateutil module:

Then, we have to create an exemplifying pandas DataFrame that we can use in the examples later on:

As you can see, our DataFrame contains two columns with dates and times.

The difference between two date objects can be calculated with the minus operator. This will do the calculation for the entirety of two columns, the result will be in days, hours, seconds and microseconds.

Example 1.2: Using the Minus Operator to Calculate Total Seconds

If we want to get the difference as total seconds, we can use the following code snippet:

As you can see, the final set of data has a negative difference result because the dates are entered in the wrong order. In order to prevent this, we can use a custom function. Next, I’ll explain how to do that…

The following function is also used in the tutorial “how to calculate the time difference between two datetimes”, but we will go through it here as well.

The function sets some time units based on the number of seconds and then partitions the total time difference to these manually set time units and returns it in a formatted way.

Next, we can use the apply function to use our user-defined function for our DataFrame:

We can also use built-in functions from imported libraries, so let’s move on to the next example.

Another way to calculate the difference between the two pandas DataFrame columns can be using a built-in library like relativedelta.

A major difference compared to the previous example is the usage of the lambda function. A lambda function is a small nameless function, which we can use to do row-based custom operations on the DataFrame.

In this specific example, we need it to use the abs() function to prevent any negative date_diff results.

The previous method returned the difference as a relativedelta object, if we want to format the output as a string, then we can use the method in the following example:

If you think the previous leads to too long outputs, then you might use the following method to generate a more compact output.

The format method is used to fill the output with characters of the user’s choice to set the number of characters.

In this case, if the month difference is 5, then it will be altered to be 05 and so on.

Do you need more explanations on how to calculate the time difference in Python? Then you should have a look at the following YouTube video of the Statistics Globe YouTube channel.

This post has shown how to get the time difference between two columns of a pandas DataFrame. In case you have further questions, you may leave a comment below. 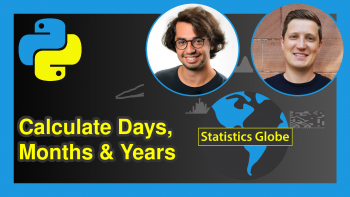 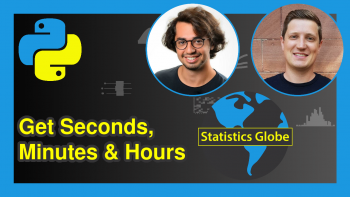