timedelta is a submodule of the datetime module, which provides the opportunity to work with datetime objects. timedelta objects are used to do mathematical operations in terms of date and time, and represent the difference between datetime objects.

So now the part you have been waiting for: the Python syntax.

Firstly, we need to import the datetime module and the humanize package.

Let’s also create some datetime objects in Python for the demonstration.

If you would like to create a timedelta object, you have two main options. Let’s have a look at both of them:

One of the ways to generate a timedelta object is using the timedelta constructor function, which provides the following parameters: weeks, days, hours, minutes, seconds, and microseconds.

The parameters are not bounded, in other words, the resulting total amount of time will be automatically normalized to the timedelta fields. For an example, see below.

timedelta objects have 3 fields: days, seconds, and microseconds. See how the fields of td1 are printed out in the following script.

If we called “td_1.hours” in our script, we would run into an error as “hours” is not a field in timedelta objects.

Another way to generate timedelta objects is subtraction. This operation returns a timedelta object which is equal to the time difference between two datetime objects. The sample data objects dt_1 and dt_2 are used for the demonstration, see below.

timedelta objects can also be negative, see the subtraction of dt_2 from dt_1 below.

You may learn more on how to get the time difference between two datetime objects here.

By default, timedelta objects are in the format hh:mm:ss. If the days or microsecond fields have non-zero values, then they are expressed at the beginning and at the end respectively, see the difference between the display outputs below.

However, if we need a customized format, then we can define our own function, as shown below.

The humanize.naturaltime() function can be used to convert timedelta objects to phrases in English. The only downside is that it returns only an approximate time.

The function works with negative timedelta values as well, see below.

For this example, we can use the previously generated objects dt_1 and td_1. See how the datetime object dt_3 is created by adding dt_1 to td_1 below.

In this example, I’ll explain how to subtract a timedelta object from a datetime object. For this example, we can use the previously generated objects dt_1 and td_1 (as we already did in the previous example).

See how the datetime object dt_4 is created by subtracting td_1 from dt_1 below.

Similar to the linked tutorials in the previous example, we do also provide articles on how to subtract seconds, minutes, and hours as well as days, months, and years.

Now it is time to subtract them from each other which returns another timedelta object.

The time difference is 37 days in this example.

Example 8: Adding and Subtracting timedelta & datetime Objects in a Row

Example 8 explains how to combine addition and subtraction operations with datetime and timedelta objects in a single line of code. See td_combination below.

This example illustrates how to express timedelta objects in terms of seconds. We can utilize the total_seconds() function to implement it.

For this example, we’ll use the timedelta td_1 object that we have created previously.

To convert timedelta objects into other time units different from seconds, we can use the total_seconds() function first, and then convert the seconds into the time units of interest.

For instance, we can transform a timedelta object to hours as shown below.

The same process can be repeated for other units as well by changing the divisor to the number of seconds in that time unit.

On Statistics Globe, we provide more detailed tutorials on how to transform timedelta objects to other metrics such as minutes, hours, days, months, and years.

Do you need further info on the Python programming syntax of this article? Then I recommend watching the following video on the Statistics Globe YouTube channel. In the video, I explain the examples of this tutorial:

In addition, you could have a look at the other tutorials on this homepage. I have published several articles already:

Summary: In this Python programming tutorial, you have learned how to deal with timedelta objects. Don’t hesitate to tell me about it in the comments section below, in case you have any additional questions or comments.

This page was created in collaboration with Ömer Ekiz. Have a look at Ömer’s author page to get further information about his professional background, a list of all his tutorials, as well as an overview of his other tasks on Statistics Globe. 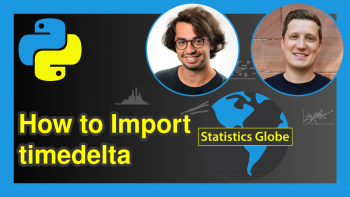 How to Import timedelta in Python (2 Examples) 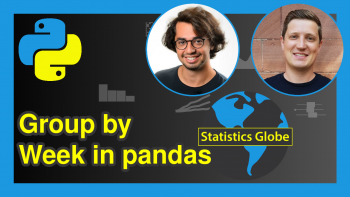