In this article you’ll learn how to reverse the rows and columns of a DataFrame in Python programming.

To create an example DataFrame, we have to import the pandas software library:

Next, we can create some example data using the DataFrame function of the pandas library as shown below:

Have a look at the previous output – We have created a DataFrame with five rows and two columns x1 and x2.

In this first example, I’ll explain how to reorder the rows of a DataFrame in Python.

For this, we can use the Python code that you can see below:

As you can see, the values of the bottom of our DataFrame have been moved to the top and the other way around.

However, you can also see that the indices of our data frame have been reversed as well.

In the next example, I’ll show how to keep the indices in a reversed DataFrame. So keep on reading!

Example 2 demonstrates how to keep the index order in a reversed DataFrame using the reset_index function in Python.

The values in our reversed DataFrame are the same as in Example 1. However, this time the indices in the reversed data table are still ranging from 0 to the number of rows.

So far, we have only modified the positioning of the rows of our DataFrame. However, it is also possible to rearrange the variables in our data matrix.

The following Python syntax explains how to reverse the columns in a DataFrame:

The previous output shows the result of this example: We have switched the positions of our two variables x1 and x2.

Do you want to know more about DataFrames in Python? Then you might want to have a look at the following video of Joe James’ YouTube channel. He explains how to manipulate pandas DataFrames in more detail.

Additionally, you might want to have a look at the related tutorials of this homepage. I have released several other Python tutorials already:

In this tutorial you have learned how to reorder the lines and variables of DataFrames in the Python programming language. In case you have any additional questions, let me know in the comments. 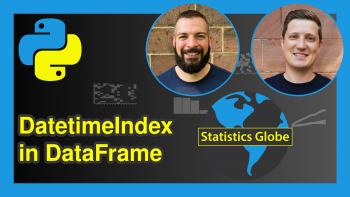