This tutorial demonstrates how to create a pandas Series from a DataFrame in the Python programming language.

With that, let’s jump right to the example!

We first have to load the pandas library, in order to use the functions that are contained in the library:

As a next step, we’ll also have to create some example pandas DataFrame:

Have a look at the previous table. It shows that our example data is constituted of one row and five columns.

The following Python code explains how to convert a pandas DataFrame with one row to a pandas Series in the Python programming language.

Have a look at the previous console output: We have created a pandas Series containing the values from our input data set.

In case you need more explanations on the topics of this tutorial, I recommend watching the following video on my YouTube channel. In the video, I illustrate the examples of this page in Python:

Furthermore, you could have a look at some of the related Python posts on my website:

In this tutorial, I have demonstrated how to transform a pandas DataFrame to a Series in Python programming. In case you have further questions, let me know in the comments. 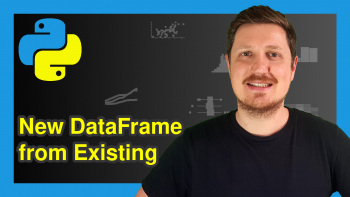