This page illustrates how to identify similarities and differences between two vector objects in the R programming language.

The previous output of the RStudio console shows that our first example vector has three vector elements: The characters A, B, and C.

Our second example vector also contains three elements. However, the second vector consists of the characters A, B, and D.

In the following examples, I’ll show different alternatives on how to compare these two vectors in R.

In Example 1, I’ll illustrate how to test whether our two vectors are exactly the same, i.e. if each vector element of the first vector is equal to the corresponding vector element in the second vector.

For this, we can use the identical function as shown below:

The RStudio console returns the logical value FALSE, i.e. our two vectors are not identical.

Example 2: Check Which Vector Elements of Two Vectors are the Same Using == Operator

This example explains how to test for equality element by element using the == operator.

The first and the second element are the same, but the third element is different.

Note that we can apply this R code only in case that both vectors have the same length (or in case the length of one vector is a multiplier of the length of the other vector).

In this example, I’ll use the %in% operator to test whether the elements of the first vector are equal to any element of the second vector.

Again, the RStudio console returns TRUE for the first and the second vector elements.

The syntax below shows how to return all vector elements that exist in both of our vectors using the intersect function.

The characters A and B exist in both arrays.

Example 5: Find Elements that Exist Only in First, But Not in Second Vector Using setdiff() Function

In Example 5, I’ll illustrate how to apply the setdiff function to return values that only exist in the first vector.

The letter C exists only in the first vector.

Some time ago I have released a video on my YouTube channel, which illustrates the topics of this article. Please find the video below.

Besides the video, you may have a look at the related RStudio posts on Statistics Globe.

To summarize: At this point you should have learned how to compare vectors in the R programming language.

Note that we could use the same R syntax to match and compare columns and find overlaps in a data frame as well.

Please let me know in the comments section, in case you have any additional questions. 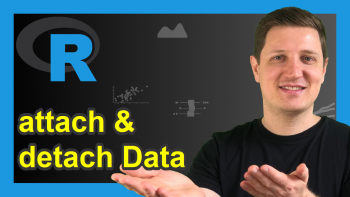 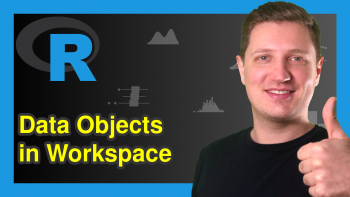 Print All Data Objects in Workspace in R (2 Examples)