In this tutorial you’ll learn how to append a new value to a vector in the R programming language.

In this R tutorial, I’ll use the following example vector in R:

As you can see based on the output of the RStudio console, our example vector is a character vector and contains five times the value “a”.

The first example show the most common way for the appendage of new elements to a vector in R: The c() function. The c stands for concatenate and the function is used to combine multiple elements into a single data object.

The previous R code concatenated the new value “b” to our example vector and stored the new vector in the data object x1.

The output is the same as in Example 1.

The next alternative is often used within for-loops or while-loops, since it relies on the index of the new element.

With the following R code, we can insert a new element after the last index position of our vector:

Again, the output is the same.

We can also apply the R codes of the previous examples to an empty vector. Consider the following example vector:

As you can see, the vector is an empty character vector.

Now, we can add a new value “b” to this empty vector as follows:

Note that we used only character vectors in this R tutorial However, we could also apply these R codes to other data types such as numeric, factor, or more complex character strings.

Do you need more information on the examples of this article? Then you may watch the following video which I have published on my YouTube channel. I’m explaining the topics of this article in the video.

Furthermore, I can recommend to have a look at the other articles of my homepage.

Summary: In this article, I explained how to combine values into a vector in R programming. Don’t hesitate to let me know in the comments section, if you have any further questions. 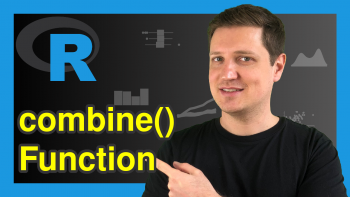 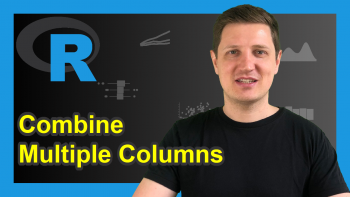