This tutorial explains how to identify and change working directories using the getwd and setwd functions in the R programming language.

Definitions: In the following, you can find the definitions of the getwd and setwd functions.

Basic R Syntaxes: You can find the basic R programming syntaxes of the getwd and setwd functions below.

I’ll explain in the following three examples how to use the getwd and setwd functions in R programming.

In this Example, I’ll illustrate how to return the currently used working directory in R. For this, we can run the getwd command as shown below:

As you can see, the getwd function returns a character string containing the filepath of our current working folder to the RStudio console.

The following R syntax explains how to change the working directory using the setwd function in R. Have a look at the following R code:

We had to specify a character string containing the filepath we want to use within the setwd function. Note that you have to use a slash (not a backslash) to specify your path when you are working on a windows computer.

We can check if the switch to a different working directory worked well by using the getwd function again:

The previous R code stored our path in the data object my_path. For instance, we can use this data object to write a csv file to our folder:

Have a look at the folder you have specified. It should contain a new csv file called some_data:

Do you need more explanations on the R programming codes of this page? Then you may want to watch the following video that I have published on my YouTube channel. In the video, I show the examples of this tutorial.

In addition, you may want to read some of the other posts of my homepage:

In summary: In this R tutorial you learned how to apply the getwd and setwd functions. If you have additional questions, don’t hesitate to let me know in the comments below. Furthermore, don’t forget to subscribe to my email newsletter in order to get updates on the newest articles. 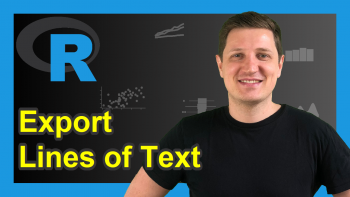 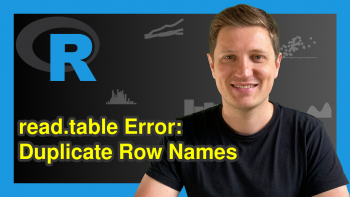 R Error in read.table: duplicate ‘row.names’ are not allowed (3 Examples)